At the risk of burning you out on statistics from Sunday afternoon that should blow your mind, allow me this one more.

The Cowboys accomplished something offensively on Sunday that is normally reserved for high school and college offenses, but almost never done in the NFL.  In fact, in the last 1,000+ NFL games played, I only found it one other time (going back to 2010).  It is the absurdity of 9 yards per play.

Actually, on Sunday, in their 54 offensive snaps, the Cowboys accumulated 522 total yards for a yards per play mark of 9.6667.

As I can tell, it has happened one other time - a full year ago - when San Francisco bombed Buffalo, 45-3.  And that is it.  No other team in this age of sling it around has ever done this, partly because, maybe, no team has felt that it has to press the issue offensively for an entire game.  Even Denver in this very game, "settled" for 7.5 yards a play - a drop back into the more reasonable range of what we expect from high-powered offenses.

In fact, I am not sure I have ever seen a game where each team never had a drive where they weren't thinking 7 points at the NFL level.  Oddly, the game that Sunday made me think of quite a bit was the college football affair last fall between West Virginia and Baylor, in which the two teams combined for 133 points and featured Geno Smith, Tavon Austin, and of course, Terrance Williams.  In fact, I giggled when I heard a media colleague ask Williams yesterday if he had ever been involved in a game like this - as Williams played in both of these games and in the one 12 months ago in Morgantown had an absurd 17 catches for 314 yards.   If anyone was equipped for the mental gymnastics of this game, it was Williams.

The numbers just don't stop from this game - and in this piece, since we look at the offensive performance exclusively, we are going to really have to dig to find things to complain about.  Look at the mind-numbing performance:

Yes, they did turn the ball over twice and yes, they did have some issues with pass protection, but overall, it was one for the ages.

Now, how much of it was based on the opponent and how easy is it to bring back the deep ball?  We will see, because Jim Haslett is not going to sit back and play without the blitzing like the Chargers and Broncos did.  Instead, the Redskins will definitely follow their recipe from last December and the one that the Chiefs followed in Week 2 and bring pressure.  We are starting to see once again that when Romo has time and protection, he is going to fire the ball downfield and he will have guys breaking open.  I promise that Washington isn't going to go for that.


Data from Week 5 vs the Denver Broncos:

Here are the passing charts to see what was being accomplished on Sunday.  Intern Tim is back with us this year and he has made some pleasing to the eye charts for us to see.

Blue is a completion. Red is incomplete. Yellow is a touchdown, and Black is an interception. The passes are lines from where Romo released the pass to where the pass was caught. This shows you his release point and where he likes to throw when he slides in the pocket.

It would certainly help if you could just click on all of the charts from all of the games to see how this compares relative to the other games.  But, for now, either go back through the series on your own with the blog archives or trust me - this team decided to throw 6 balls downfield 20 yards or more in this game.  That is pretty much as many as they have thrown all season.  The previous game high was 2, so to throw 6 in one game might be an outlier (like forcing 6 turnovers in one game) and a complete result of so many plays developing into some sort of "sandlot" improv that Tony was making a habit on Sunday.

This is why - if I am designing a game-plan against this version of the Cowboys offense, I would absolutely throw pressure at Romo on a regular basis with numbers.  I must blitz him and when teams have shown the willingness to send pressure, the Cowboys have had a tough time burning them in the 2011-2013 time frame.

We will talk more about this on Friday when we examine the Redskins' plan, but just know that since the line of demarcation (2010 - and the breaking of the Romo collarbone/Garrett promotion to head coach), the performance of Romo under pressure has gone from well-above league average to slightly-below league average.  And from 8.4 yards per attempt to 6.7 - which suggests dump downs as opposed to attacking.

In the meantime, look at these passing charts - largely against 4 man rushes - as he throws it all over the yard, especially in the 2nd half. 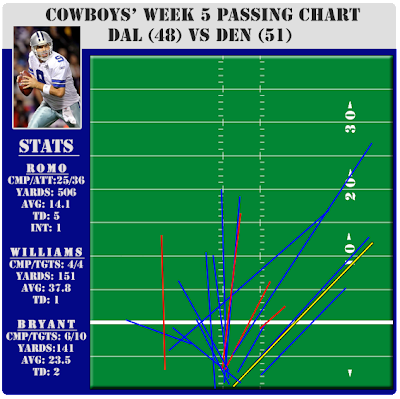 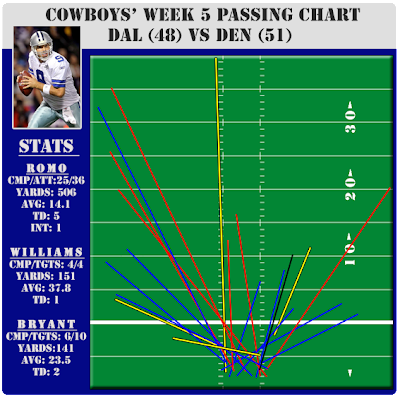 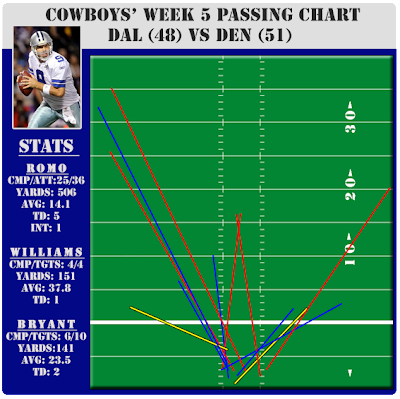 Drive Starters - The 1st play of each drive can often reveal the intent of a coach to establish his game plan. How committed is he to the run or pass when the team comes off the sideline? We track it each week here -

Shotgun snaps are fine on 3rd Down and in the 2 minute drill. But, we track this stat from week to week to make sure the Cowboys aren't getting too lazy in using it. They are not efficient enough to run it as their base, and with a 15%/85% run/pass split across the league, there is no way the defense respects your running game. When shotgun totals are high, the Cowboys are generally behind, scared of their offensive line, or frustrated.

Sunday, being the incredibly strange game that it was, contained a very high amount of shotgun and therefore drove the season number back up to 63%.

And now, a look at the efficiency of each personnel grouping.

Before you study the data below, I would recommend that if the numbers for the groupings are unfamiliar, that you spend some time reading a more expanded definition of the Personnel Groupings here.

This week, when we ask what did the Cowboys throw at the Broncos that Denver and Jack Del Rio might not have been expecting, I believe it would have to be some lightly-used shotgun packages that were thrown out routinely on Sunday.  Part of this may have been saving something for a point in the schedule where you expected you would need 35+ to get a win (or in this case, 52+) and the other part is just trying to figure things out because Miles Austin is not around and you could make the case that heading into this game, none of the other WRs were scary prospects for the opponent.

Regardless, S01 had been run 6 times all season, but on Sunday the Cowboys tried it 10 times and hit big on it for almost 200 yards.  And S02 was run 7 times before Sunday, and 7 more times during this game for 11 yards per snap.

Let's look at each one, briefly:

S01 - It starts with the personnel grouping.  You bring on 4 wides, they are immediately putting Dime personnel on the field (6 defensive backs)  They are going to try to cover Witten with a LB - if they go to 7 defensive backs, you might have to run on 3rd and 4 and try to make them pay that way.  But, in this spot, Witten is staying in to pass protect and therefore the Cowboys design is to spread them out if Denver is going to sit in a Cover-2 look with deep safeties - well beyond the sticks. 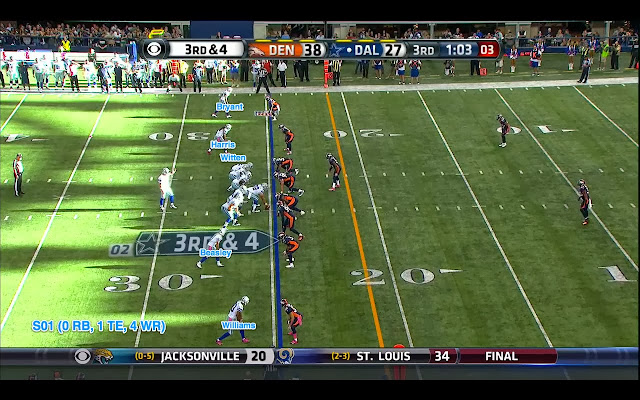 So, good protection, and a comfortable Romo just picks a matchup he likes and waits for the man to make his move.  This is 7 on 7 football. 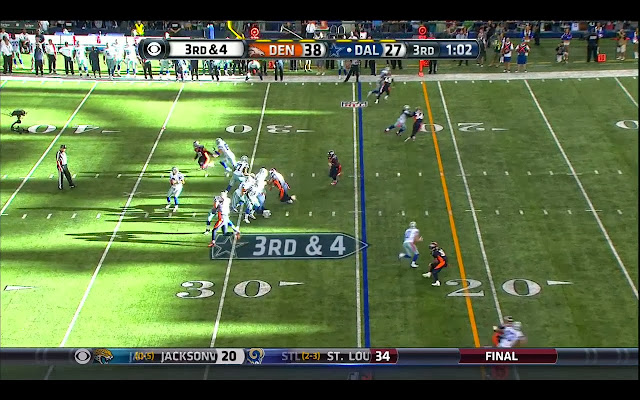 This demonstrates that Cole Beasley is being under-utilized.  He can absolutely beat corners off the line (especially when he is drawing the opposition's 4th best corner) and needs to be put in these spots more.  Huge gain. 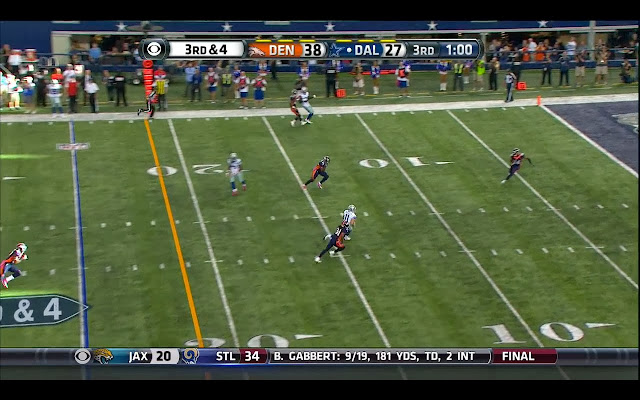 S02 - Again, with S02, you spread them out and make them either move the safeties up or we play flag football until it hurts.  Here, the Broncos are in nickel - 5 DBs and they keep on 2 LBs because they want there fast LBs to run with Witten and Escobar rather than give up the size advantage.  But, if they are going to try that, Witten will beat a linebacker all day.  This is what teams have to do who don't have Eric Weddle or Eric Berry.  Without stud safeties, Witten will draw a LB and he can kill them with a simple slant. 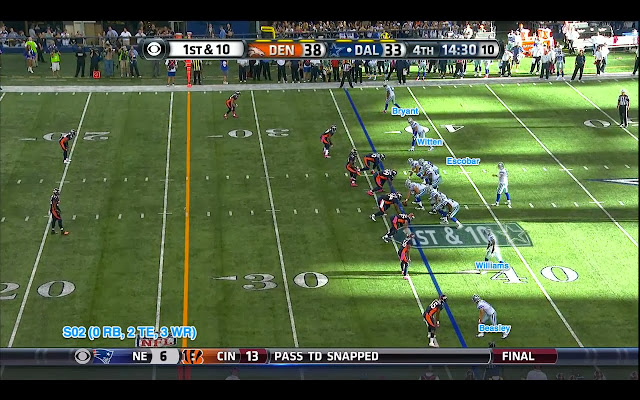 Romo has time, waits for a win right off the line, and since it is 1st and 10, he doesn't have to worry about depth of route before he takes advantage.  Clean pocket, easy throw. 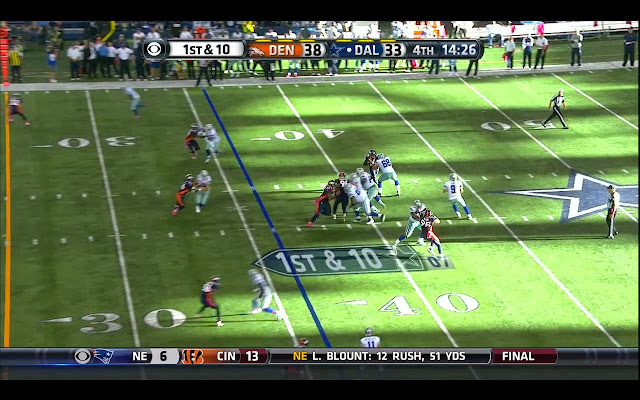 And look at this window for another huge gain.  Linebackers don't have a chance. 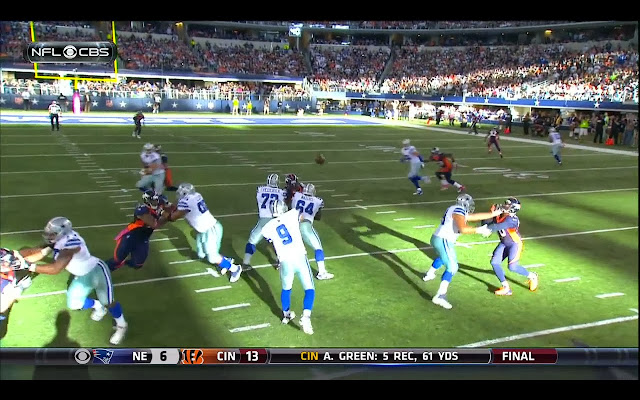 And that is why I need more S01 and S02.  Murray on the field doesn't cause the matchup issues that Beasley/Harris/Escobar can when the Cowboys spread the defense out.  This has to be included moving forward.  It is very difficult to defend.

* - Knee Plays are not counted in play calls.


Totals by Personnel Groups on 3rd/4th Down:

As you can see, hardly any production in this category - 9 plays for 22 yards on 3rd Down will not cut it in any situation.

Denver was not up for blitzing as they tried to play deep safeties all day and still were beaten over the top.  Washington has secondary issues, too. 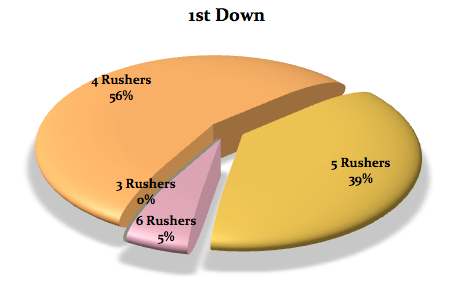 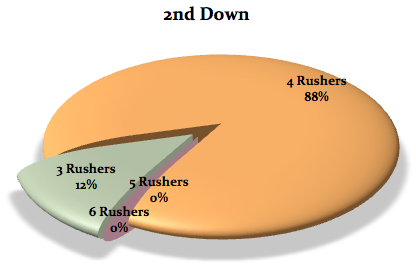 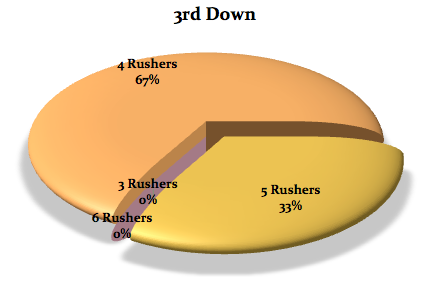 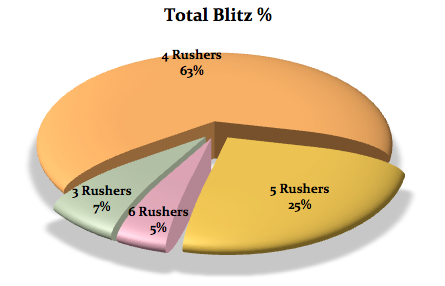 Thanks to John Daigle and Tim Krajewski for their work on the charts and graphs.

SUMMARY:  Very difficult to find much to complain about here.  Tomorrow, when we look at the defense, we might have a different story.

But, it seems that the Cowboys have seen that they need explosiveness in their offense.  They must attack and they must make you defend the whole field.  They demonstrated imagination here and if they can draw anything from this day, it is to prove that they should be able to make defenses beg for mercy.  They may not have the most dangerous offense in the league, but they cannot make the opponent's job as easy as they have early in the year.

Spread them out and slice them up.  I assume it will become much more difficult when defenses decide to bring more pressure and close down those windows again by moving safeties up into passing lanes, but it will be up to the Cowboys to find the proper counter punch.

Tough to ask much more of the offense than they produced with record-setting numbers, including that staggering 9.6667 yards per snap.

Posted by Sturminator at 8:56 AM