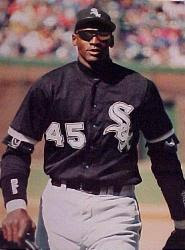 Basically, it is this: For as long as I can remember, I have kept ticket stubs for the various sporting events I have attended in my life. Sadly, I don’t think I started doing this with any consistency until I was in 8th or 9th grade, but since then, if I go to a game – especially a game in an odd place (no offense Dallas Stars, but I have been to about 400 home games in the last 10 years – so I don’t count those) I keep either the ticket stub or the press pass.

Well now, with the miracle of the internet, you can actually research most all of those ticket-stubs by finding articles and box-scores about those days and games that you attended throughout your life.

So, I am doing it. My memory can tell you some of the better games and performances I have seen, but with each passing year the games all run together in my memory, and I realize if I don’t do something with my two shoeboxes full of ticket stubs, then I will never have a concise record of when I did see Carl Yastrzemski in person , or the first Green Bay Packers game I ever attended .

Is it necessary? Of course, it is not. But, I am a bit obsessive about things like this, and slowly but surely I am going to work through these ticket stubs to figure out when and where all of these half-memories in my head occurred. It is a interesting study in how I became a sports nerd. All of these experiences combined together to get me where I am today. Where is that, exactly? A guy who is 36 years old, and still cannot wait to go see another game as soon as possible.

The earliest ticket stub I found was from June 23, 1982 . This was my 10th birthday present, going to see the New York Yankees play my Milwaukee Brewers 3 days before my magical birthday. It did not quite turn out like I had hoped, as Goose Gossage broke my little heart by mowing down the Brewers rally attempts late with an 8-out save, and getting the Yanks a 3-2 win in Milwaukee. Roy Smalley and Ben Oglivie hit home runs in the game, according to the boxscore. I know I had attended a few games prior to that, but that is the first time I decided to keep the ticket stub.

Anyway, right now I am quite a ways into this project, and I have decided that most of the games I have seen had nothing special about them. A few were a bit more remarkable, and aside from seeing some pretty cool playoff games, I suppose the most significant game I attended was seeing Nolan Ryan’s 300th win in Milwaukee which may be my claim to fame.

Seeing Michael Jordan score 50 in 1987 at the Mecca in Milwaukee ranks atop my NBA list. I saw MJ only twice in person with the Chicago Bulls, that night, and then the night my buddies and I decided to drive to Chicago Stadium on spring break of 1993 to see the Bulls play at home against the Washington Bullets . That game was remarkable for another reason – the fact that Louisville’s LaBradford Smith lit up Jordan for 37 points, and Jordan had a miserable 9 for 27 shooting night on the offensive end, too. Jordan looked awful. The bad news for the Bullets was that the next night, the two teams went back to Washington to play again, and that night Jordan went back to being Jordan (47 points) and LaBradford went back to being LaBradford (15 points).

Anyway, as most human males in the USA, I was absolutely obsessed with Michael Jordan. From 1986-1998, there were other athletes and other sports that I loved (surely the Packers and Favre come to mind), but Michael Jordan was not fit to be ranked amongst humans. He was above that. He was Air Jordan.

Which brings me to the ticket stub that may have to be ranked as “the most unique sports moment I ever attended”. I have seen 2 Stanley Cups won in person, 1 NBA Championship won in person, and countless other moments, but I think that since championships are won every year, this one is better.

It happened on March 14, 1994. It was in Sarasota, Florida. My future wife and I were joined by 6,408 other humans to witness something that had never been done before: Michael Jordan’s first professional hit. Yes, it was in a spring training exhibition. Yes, it was an infield single down the 3rd base line. But, of all of the sports moments I had ever seen, to see the great Jordan get his first hit is my ticket stub of greatest pride.

The fact that I was even there might best explain who I am. Spring Break for me was always a chance to go home to Wisconsin for a week. Never once did I join the thousands who went to Florida or beyond for the big trip to the beach and debauchery. I just didn’t roll that way, and I really never have. But in 1994, there were a few things to consider. First, I had planned for months, since Michael had retired from basketball, that if he was going to try to play for the Chicago White Sox that we (Sally, my wife– who evidently didn’t mind since she agreed to go) should go “visit the Grandparents” who happened to live 15 minutes from where the White Sox train and witness it. Catch up with the grandparents, and not need a hotel? This all must be too good to be true.

But, then a good wrench was tossed into my plan. The Liberty Flames, who were my life at the time, had just shocked the Big South and won the conference tournament, and now were going to the NCAA Tournament as a #16 seed and would play during spring break somewhere in the United States on either the Thursday or Friday of the week. It would turn out to me Landover, MD, to take on the #1-seed North Carolina Tar Heels. Since I helped out with the radio broadcast of the team, I was going to be there, but that sabotaged my “see Jordan play baseball” master plan.

Still, undaunted and a little nuts, I decided that a shorter trip to the Grapefruit league was better than no trip at all. Sally and I left on Friday after class, drove the 725 miles straight through, and would have to compact a week’s worth of baseball into 3 days, because Tuesday, we had to drive the 725 all the way back. This was living.

Well, on Monday, we did the day night doubleheader. The Texas Rangers trained in Port Charlotte, which was even closer to the Grandparents house, and we saw them take on the St Louis Cardinals during the day. Then, at night, it was off to Sarasota to see the Twins visit the Chicago White Sox.

The problem with researching the details of this game, is that I cannot find any site on the web that has spring training boxscores from 1994. So, last night, I paid the Chicago Sun Times my $3 to buy the archived game story from the March 15, 1994 newspaper. Here is a small portion of it:

Michael Jordan is no longer 0-for-baseball.

After a month of frustrating at-bats, scathing editorials and two blown calls, Jordan finally got his first hit of spring training and also stole a base in the White Sox' 9-5 victory Monday over the Minnesota Twins at Ed Smith Stadium.

Leading off the top of the eighth against right-handed pitcher Jeff Innis, Jordan hit a hard shot down the third-base line that Jeff Carter barely got a glove on.

There was no throw to first base, and as Jordan walked back to the bag, a crowd of 6,410 roared approval.

"I knew I was going to get a hit today," Jordan said. "I woke up, I played golf, I felt relaxed. And now I'm going to keep hitting the ball. I feel it."

Using his own bat, Jordan connected on a 1-! 1 sinker from Innis, a sidearm pitcher who was 2-3 with a 4.11 ERA with the New York Mets last season.

Finally, the burden has been lifted. Jordan is 1-for-15 (.067) in Grapefruit League games.

"The drought is over and done with," Jordan said. "This is a great feeling. No more (zeros).

"I promised myself I would step toward the ball, not toward third base (against Innis). I made good, solid contact. It wasn't a little lolligag hit." 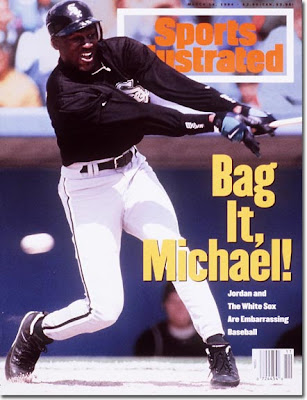 This game was played on the exact same day that the famous cover story hit newstands - Sports Illustrated just hammering his Airness for daring to play baseball. I don’t recall what my whole thought process was at the time, other then thinking Jordan can do no wrong, and these stodgy old media dorks need to stop giving MJ such a hard time.

Anyway, I will never forget my one and only trip to Spring Training. Which was also, Jordan’s one and only trip. His baseball career only lasted that one year, and he was soon sent down to the minor league camp where he would be assigned to AA Birmingham. With the Barons he would hit .202, and I seem to recall that after that year he tried to play for Scottsdale in the Arizona Fall League.

Regardless, one year later, on March 18, 1995, he faxed the NBA his press release that said “I’m back” and 11 days after that was scoring 55 at Madison Square Garden. It didn’t take him long to go back to being who he was- the greatest basketball player ever.

But, March 14, 1994? That was the Monday night in Sarasota that only a few of us witnessed his first hit in baseball. My Ticket Stub of greatest pride.
Posted by Sturminator at 8:33 AM

I don't have as many stubs..but one has a particular meaning to me..It was the day I became a Cowboys fan..

Sept..22..1963..Cotton Bowl..My dad took my brother and me to most games..You could buy an adult ticket and get up to 5 kids in free..My mom would give him less grief if he took us..

I was hooked..and funny the MJ reference made me think of it..I became a Boys fan..thanks to my dad..(with an assist to my mom) and Jim Brown..

You ought to put yours in book form..I bet they would be interesting to read..Thanks again...