Night on the Bench 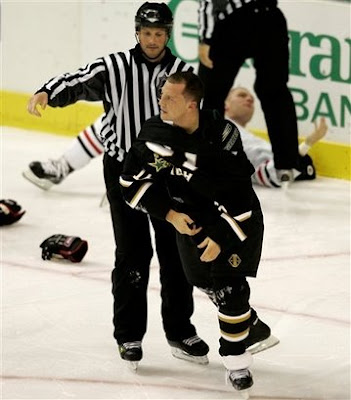 I was asked to write a thought or 1500 words on the greatest sports experience ever.

OK. I hope this does my Thursday evening justice. But, I am not certain that words can articulate the evening of October 2, 2008, as seen through my eyes.

But, here it goes:

For reasons I cannot quite explain, the Dallas Stars invited me to do something that about 1 human a year has been invited to do: Experience an NHL game experience from the player’s bench during an actual NHL pre-season game. Like Mike Heika and a few others before me in past seasons, Dave Tippett signed off on an “honorary assistant coach” for the Blackhawks-Stars game, and I was lucky enough to be the media guy who was allowed behind the curtain and on to the bench.

In the words of Tommy Boy, “I’ve seen a lot of things in my life, but that…was…awesome!” Wow. Double-Wow.

Let’s start with the idea of witnessing the NHL product from an amazingly close proximity: The speed is breath-taking. The skill is shocking. The chaos of something so simple as a line-change is enough to make your head spin.

And of course, close enough to hear the sounds. I have been lucky enough to have front-row “glass” seats several times in my life, and am always taken with the sights and speed. But even with seats in row 1, you cannot hear it. You cannot hear the amazing and shocking conversations that are going on in every direction.
The testosterone was flowing in great quantities from my viewpoint (which was roughly 2 inches from the back of the players bench, 2 feet to the right of the assistant coaches of the Stars). It was clear that Chicago elected to leave many of their “skill” types out of the line-up, thus dressing a far more abrasive crew and the Stars had plenty of the abrasive types to match.

This led to fights. And more fights. And roughing penalties. And scraps. And scrums. Offering even more flavor to the fight card were amazingly amusing conversations between both benches. Many that would make the network censors wear out the beep button.

Holy cow. I believe George Carlin once ranted about the supposed versatility of the “F-bomb” and how it could be substituted for so many parts of speech. It can be a noun, a verb, an adjective or an adverb, his routine suggested. I am here to tell you: He is right. I lost count of the bombs at about 100,000 or so, but I don’t believe I am at liberty to quote many of the conversations that were held between the two teams on what was a particularly heated affair for a preseason tussle.

I thought Steve Ott could talk. And he can, mind you, but if he is going to maintain his spot as the most talkative Dallas player, he is really going to have to keep his mouth moving because Sean Avery is teaching the class. Avery and Ott and others were letting the Blackhawks muscle know that they were ready anytime, anywhere. When the muscle would skate over – Jesse Boulerice in particular (who incidentally has had some memorable moments in this very building involving his face and a fist that he did not own), the conversation would heat up to a point where it looked like it would clearly boil over.

So here I am. Right over the shoulder of Ott and Avery and BJ Crombeen and Krys Barch as the verbal arrows are flying in both directions. Part of me wants it all to break loose, and part of me wants my mommy. This is surely not a place for someone who is not expecting to get blood on their clothes. I feel like I have been invited into the middle of a UFC Pay Per View, but I have to stand inside the octagon for the fight. Altogether awesome and scary at the same time.

I was trying to control myself the whole 3 hour experience, because I am hearing these fabulous comedy-laced screaming matches between players who are trying to stand up to a bully on the other-side and at the same time doing it in a way that would amuse and entertain the rest of the bench. My first instinct when I hear a zinger about someone’s mom is to crack up in laughter because that is exactly what I would do if I was watching it on television or from a seat in the arena. But, I was in a suit and tie on the bench as an “assistant coach”. I was worried that if I start laughing, the darting eyes from the Chicago bench may turn their attention to me, and that was clearly the last thing I wanted to have happen – so I attempted my best poker face all night long while enjoying the comic styling of Mr. Ott, Mr. Avery, and the rest of the Stars comic troop.

By this point of the column, you are no-doubt wondering if I am going to discuss hockey items like how Fabian Brunnstrom looked or how ready James Neal seems for his first season with the big boys. I can tell you that Brunnstrom looks promising, talented, and raw, and Neal looks quite ready – but that wasn’t totally top-of-mind for me. What was on my mind was the amazing emotional current of energy oozing from both benches as everyone seemed pretty angry at everyone in a different colored sweater. The puck was honestly secondary to me, and if I am not mistaken, at times it was secondary to many of the men on both teams.

Now, on to the 2nd intermission. If you were at the game, you know that with :06 left in the 2nd period, all heck broke loose yet again. Jack Skille wanted to fight Toby Peterson, and Peterson was not interested in dropping the mitts. Well, Skille didn’t care, and proceeded to take part in a 1-man fight. After the penalties were handed out to Skille and many others on other parts of the ice doing things that needed punishment, the final seconds ran off the clock for the period.

At that point, the Blackhawks skate to their tunnel in the corner of the arena, and the Stars leave off their bench down another tunnel back to the dressing room area. Well, I am standing right there, but as was my objective all night, I stand back and let all the players and coaches go first. So, they all pass me, and now I follow the last few forwards off the bench who happen to be Mr. Ott and Mr. Avery again.

At the same time, the Blackhawks coaching staff follow Hawks head coach Denis Savard down the same tunnel we are walking. So here are the Stars players side-by-side with the 3 man Blackhawks coaching staff. Words are exchanged, and I am now down in the tunnel witnessing at very close range a great verbal joust between all parties. I am not going to reprint the entire conversation, but let me tell you that the players were not amused at Skille’s actions, the coaches were not amused that the Stars players were talking about Skille’s actions given their own resumes, and the Stars players were not amused at the Blackhawk coaches salty insults. In the blink of an eye, a simple walk to the rooms had almost turned into the Battle of Stirling (Braveheart reference). Both sides had to be separated, and I was able to return from my mental happy place and continue my walk. Once again I pondered how I was placed in such a lucky position as to witness this amazing display of NHL testosterone. Wow. Talk about a priceless experience.

The game went to a shootout and the Blackhawks got the win, but you can tell both teams are counting down the seconds to tee them up for real in a week.
Things I learned Thursday Night: 1) There is no such thing as a meaningless preseason game to these guys. While the intensity may have been less than a regular season game, these guys are going full speed and definitely full emotions are present. 2) There is no such thing as a wimp in the NHL. There may be guys who are tougher than others, but I saw almost everyone have their manhood challenged, and you do not get to this level of hockey by backing down to someone who is trying to bully you. And 3) While the experience is one I shall never forget and likely never experience again, it is far less stressful to watch the game in your seats.

Anyway, what a night. What an experience. And What a sport. I am so ready for hockey right now.
Posted by Sturminator at 10:57 AM

DISCARD WHAT YOU DON'T NEED!
- Josh

Sturminator, you are my hero. AWESOME!

I envy you. That priceless experience is something any hockey fan would die for.

I've always loved you on the radio, but you're writing style is genious. It was like I was behing the bench with you. When are you going to put out a book?

Oh man, thanks, Bob! Now I'm super pumped, too!
But unfortunately I have cable and live in East Texas, which is hockey purgatory. So probably count me in for 3 televised games this year and maybe 1 attended one. Can someone get the NHL on a real channel?! Or at least get me some real cable?

Great read and good times Bob, got my hockey pron fix for today. Maybe we should resurrect the never ending toughest sport debate.

Wow. I'm totally jealous. It sounds like last night was a great (and scary) game to be behind the bench for! Great blog about it!

Primo write up. Could almost feel the heads ducking with pucks bouncing around in the bench area. Very pumped for the Stars season. TG for streaming feed and your blog as I travel a lot. Pls keep it up.

I felt like I was there on the bench with you. Not that my opinion counts but I really enjoyed this piece. Keep them coming.