I really do. I consider myself such a fan of docs, that I now attempt to provide a service to you by watching as many as possible - and then telling you about the ones I think are worth your time.

If you did not read version 1 of this endeavor, Please do so before proceeding . That was from August 2008, and although a lot has changed, those are most of my all-time favorites.

In that essay, I wrote the following:

Anyway, in my love of documentaries, I am constantly bombarded with doc emails. Half of them have recommendations for me. These recommendations have proved helpful from time to time, so keep them coming.

The other half of emails want to know my favorites. Of course, my favorites can encompass so many, but I did want to release my list of 10 “essential documentaries” for the genre I would try to describe here – which I have decided to alter to Top 12 since I couldn’t narrow it to 10.

Now, I am eliminating all Ken Burns-type, historical, and educational documentaries. I love those, but those would automatically be rated higher than the silly types – so let’s just do our best to leave those out of this mix. I am compiling this list entirely of the absurd, the odd, the weird, the uncomfortable, and the off-the-beaten path films. The documentaries that likely would never make the PBS cut, but surely are worth your time, and will have you talking about them with your buddies for years to come.

NOTE: I am not including a list of favorite sports documentaries (except for my top one ever - Do You Believe In Miracles). Someday soon, I will do a sports-only list, but for now, this is more of the non-sport variety.

Anyway, assuming you are familiar with the first 25 in this series, here are another dozen for you to consider:

A very enjoyable movie about Anvil, a group that almost made it in the early 1980's on the metal music scene, but for whatever reason, it didn't work out. This Doc follows them in the present day, as guys in their 50's still are following that rock-n-roll dream. They seem awfully beaten down at times, and yet cannot walk away from what they love. Good stuff.

This one is really interesting in that it is a look at steroids in a way you likely have never considered. From all angles, the effects of roids are considered, and it they talk with all sorts of people involved in one way or another. I am pretty sure Mark Cuban's production company put this one out, but don't hold me to that.

Nick Broomfield's first movie on this list that examines the deaths of the two hip-hop superstars. By the end of the movie you are certainly buying into each and every conspiracy issue, but spending quite a bit of time eyeballing Suge Knight. I am sure there are flaws in the way Broomfield presents stuff, but if his goal is to place doubt in the minds of his viewers, then he is really good at this.

A Documentary that tells the stories (and shows them) of people who have decided to use the Goldon Gate Bridge to execute their suicides. It will certainly not cheer you up, but you likely will be glued to the screen. On one hand, you wonder how the man got all of this footage, and on the other hand, you wonder why he didn't try to stop the people that were jumping.

If you loved King of Kong (which I think you should) then you will likely enjoy Chasing Ghosts. It is much the same subject matter, but done in a more traditional documentary style, rather than KoK's story of the Billy Mitchell record. This basically tells the history of video games without any good guy/bad guy conflict. Still worth seeing, in my estimation.

Cocaine Cowboys tells the story about how Miami and cocaine got together to make Miami the most feared crime city in America. Well worth a viewing if you are interested in Scarface, Miami Vice, or the countless other ways that Miami's unique combination of beauty, guns, and drugs is glorified.

This movie is from HBO's awesome Documentary series that has given us so much over the years. This one, in particular, is about race care driving in Indiana on the local scale. About people that certainly do not appear to have much going in just about any other department of their life, but it all comes together on Friday night, when they haul their beaten down race car to the local track and try to win that week's race. You meet some very odd characters in this one. Might be tougher for you to find, but well worth it. 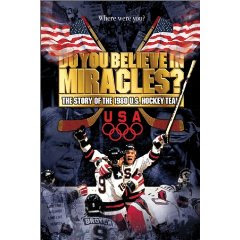 If you agree with me, that the Miracle on Ice at Lake Placid in 1980 is the greatest sporting upset of our lifetime, then you must see this awesome HBO Documentary that tells the story of the miracle in a way that will absolutely have you glued to the screen. To me, there is no better sports Doc, and that says a lot.

Jimmy Page, The Edge, and Jack White sitting around talking guitars for 90 minutes may sound like something that you are not interested in, but the way the film is put together is captivating. I absolutely loved it, but it should be noted that I love U2, and I also enjoy trying to play my guitar.

Like Biggie and Tupac after it, Nick Broomfield uses this documentary to investigate Kurt Cobain's death and follow all of the conspiracy threads that might turn this from a suicide into a murder. Again, I am not sure this "investigation" holds up in court, but it is riveting film.

Phillippe Petit was insane. And the story of his decision to walk from one of the World Trade Center twin towers to the other on a tight rope is absolutely one of the craziest and most interesting life decisions I have ever seen. But, a great story is one thing, to make it a great film is often quite another. Here we have both. Amazing stuff, and the Academy Award for best Documentary in 2008.

This may be one that appeals more to us who love hockey and grew up in the north, but I would like to find out if it appeals to you as well. A very simple doc that interviews the very famous (Gretzky, Crosby) to the not so famous about what hockey outside is all about and what it means to them. I loved it. But then again, I have skated on a pond before.

Running is sometimes considered crazy (marathon length or more), so what do we do with a group of 3 guys who have decided to run a marathon every day for months and months across Africa? From trying to get access to certain countries to dealing with your body breaking down makes it a fabulous 2 hours. I have no idea what makes someone want to do this, but I am happy to watch a story about it.

The description of a chorus of senior citizens that sing pop music might not sound like a wonderful documentary. You just need to trust me. This Documentary is one of my favorites of all time. Maybe top 5.

And there you have it.

Email ThisBlogThis!Share to TwitterShare to FacebookShare to Pinterest
Labels: Documentaries

The Fog of War
http://www.youtube.com/watch?v=VgA98V1Ubk8

The fact that Deep Water is on neither of these lists is a scandal. It streams on Netflix and is genius, just don't cheat yourself by reading the ending first.

The most brutual one I have seen (can't remember the name) about a chick who kills her bf, then she has his baby boy and then stuff happens.

amazing movie but it will destroy you.

You really should see Dear Zachary, just don't ready anything about it going in.

@Neil. Come on dude. I watch 100's of these. I think that is silly to say I like them all because I give you a dozen every 2 years.

@Neil is referring to Dear Zachary. You really should see it and see it cold.

I wasn't calling you out, I just think that it would be interesting to see what you didn't like compared with what you did like.

Also the doc I was talking about is "dear zachary" powerful and amazing.

another interesting doc I saw recently was called "garbage warrior", worth checking out.

"Thin Blue Line". If you live in Dallas you have to watch it. Also from same director: "Fast, Cheap, and out of Control"

Just saw the Art Of The Steal at IFC here in New York, it was great and might be at the Angelika or something in Dallas, look for it.

A few of my favs not included:

"Jupiter's Wife"- saw this back on the Sundance channel years ago. it's about a man who interviews this homeless woman and as the film progresses, one begins to wonder just exactly who she is and where she came from due to the stories she tells. It's endlessly fascinating and ends on a supremely poignant moment.

The Cove- agitprop, bleeding heart stuff, but a real damning film that made me look away from the screen several times.

The Devil and Daniel Johnston- great doc about musical prodigy from Austin, Texas

The Rape of Europa- probably the best doc I've seen in the last ten years, about the Nazi stealing of art and treasures in WW2. It will anger you. Then it takes a redemptive tone in the final third that will just make you cry.

Wow, perfect timing Bob. I just happen to have a paper to write for school...and I have already decided I would classify a documentary I have not seen yet. Thanks a ton. Paper or no I appreciate you sharing and really enjoyed some from Part 1.

BUMP for 'Devil and Daniel Johnston'

The Tillman Story (2010)
Pat Tillman never thought of himself as a hero. His choice to leave a multimillion-dollar football contract and join the military wasn't done for any reason other than he felt it was the right thing to do. The fact that the military manipulated his tragic death in the line of duty into a propaganda tool is unfathomable and thoroughly explored in Amir Bar-Lev's riveting and enraging documentary.

You should check out the "Paradise Lost 1 & 2" HBO documentaries. I saw others recommend "Dear Zachary"... it's a good one too.

My fave doc is THE CRUISE. Maybe you'll like it too.