Back from Guatemala Trip 3 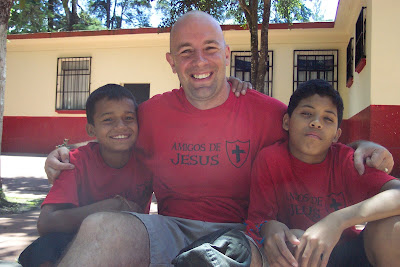 Happy Tuesday morning to you as the blog is back and ready to roll. I have returned from my 3rd voyage to Guatemala with some level of fatigue and mosquito bites, but it is all good. Or, Todo Bueno.

I feel compelled once again to tell you a bit about my experience rather than catch you up on the Rangers news of the day. This trip has become as big a deal to me as anything on my calendar, and I dare say that this particular mission trip was the best so far.

We flew in Wednesday to Guatemala City and got settled in as we prepared for our busy days to come. On Thursday, it was a 2-fold endeavor. First, we stopped and played with the boys and girls at the Buckner Baby Home . These kids ranging from ages 0-7 are so special to the 6 of us on this trip because we have now seen them multiple times and are seeing them grow up before our very eyes. It is wonderful to see these children, who have been abandoned by their families, growing up surrounded by much love. Also, many are finally receiving the medical attention and procedures that they have needed. They are kids that have an abnormal start to their lives for sure, but they are surely normal in their love for playing with toys, playing on their playground equipment, or just a fun round of “freeze dance”. 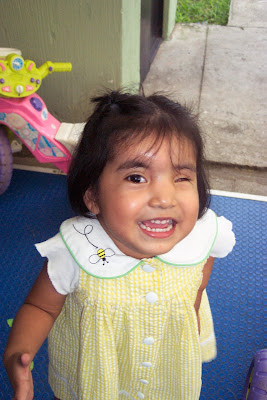 When you go, you feel drawn to one or two children in particular that you hit it off with. For me, this time it was Krystal, who is nearly 3. She has pretty severe issues with her left eye, and on top of that only has a family comprised completely of the good people who serve at the baby home. But her heart is so sweet and I played with her for quite a while and learned what sounds are made by a perros, cabellos, gatos, y vacas. I really wish my kids could have played with her, too. Adorable. The boys were all geared up in their superhero costumes and ready to test who would really win in a battle between Batman, Superman, Buzz Lightyear, and Spider Man (or El Hombre Arana). I think it was too close to call.

After our time with them was past, we me the 7 boys from the boys transitional home …That home is comprised with boys 14-18 who are selected from the San Gabriel orphanage to prepare for independent living and adult life that is ahead. Currently Buckner has 1 boys home in Guatemala City, but are soon to open a 2nd. Each one can house about 7 or 8 boys, and a host family that is very neat. Some of the guys on our trip knew these boys back in 2005 or 2006 when they were just one of the many faces at the hopeless orphanage. Now, they seem very well adjusted and full of hope for their futures. We met them for some soccer, and were pretty promptly shown how weak our game is compared to high school age boys from Guatemala.

These boys are what it is all about. They have come through their childhoods with a chance. One of them wants to be an airplane mechanic, and another a veterinarian. The fact that they have aspirations is so wonderful, because when you talk to boys who live in the San Gabriel orphanage, it is tough to find a single one who has any dreams of their future. But these boys have survived it, and now see that there is more to life than the abuse, poverty, and fear of their childhood.

On Friday and Saturday, we spent the majority of our time at San Gabriel. These boys (approx 40 boys, between ages 8-16) are housed in a former prison that you can only reach by driving through a garbage dump. To suggest it is the place the world forgot doesn’t seem to be too much of a reach. The boys all get here in different ways, but they find themselves together in a state-run orphanage where the game of survival is played every day. 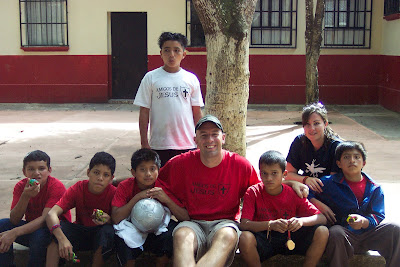 We ran a sports camp and I was put in charge of “Los Escorpions Rojo”. Our team was great at basketball, not so much at soccer or baseball. The boys are pretty excited to have someone to play with, but boys being boys, there is some level of officiating that is done as fights do occasionally break out.

Fights though, are just part of the problems there. The place seems surely understaffed, and the resources there are only what the Guatemalan government supplies. Only after Buckner got involved did the place receive their own water well. Previously, the boys would use dirty dish water to drink after a hot afternoon of soccer. Also, being boys, they wear out their shoes way quicker than new ones are supplied, and therefore have shoes that look like they needed to be replaced long, long ago.

The most powerful part of my trip to San Gabriel is that I now know some of these boys very well. For instance, Martin is a boy I have now played with last September, last March, and now this week. He instantly remembers me, and we talk with my terribly poor Spanish. What a great kid with a great smile. I am sure he could grow up to be very useful to society if we could only get him a chance. So many boys are like that, and right now Buckner and others are trying desperately to help, but they only have so much money to spend on it. They can take some kids out of these places, but the numbers game is overwhelming – for every child Buckner can house, there must be 100 more they cannot. 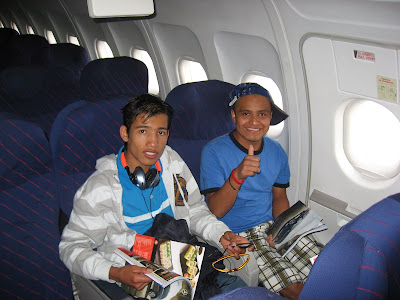 On Sunday, we did something we have never done before. We took the 7 transitional boys on a trip that they have never had. We decided to take them on a field trip I don’t think they will ever forget to the Mayan Ruins of Tikal. What a place. The boys were amazed to ride on an airplane (which is something they have never done) and just enjoy leaving Guatemala city for the day. The flight was about 25 minutes to Flores, and then we were on a tour bus to Tikal. 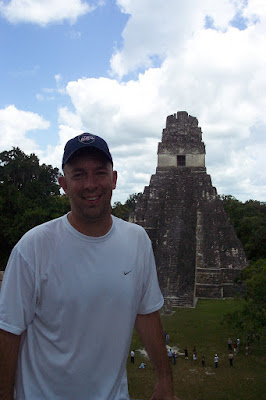 The Ruins have been shown in all sorts of movies, and is one of the more remarkable archeological finds ever. 3,000 buildings from the Mayan culture still exist, and we were able to tour, climb, and examine them right in the middle of the rain forest. This walk was long and hot, but altogether amazing as most of us from Lewisville are not used to a jungle that features spider monkeys overhead, tarantulas on the trees, snakes, crocodiles, toucans, and countless other animals in every direction. It was mind blowing, and the boys were having the time of their lives. 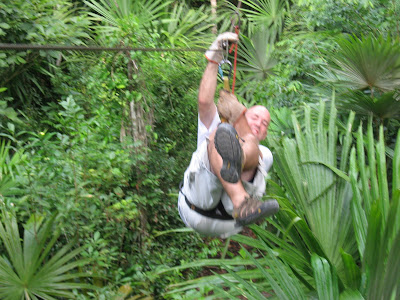 Then, before we headed back, we took the group “zip-lining”. I may have never been so scared in my life. At times 70-80 feet in the trees of the rain forest, I was terrified, and kind of participating out of peer pressure. But, once I made it through the first ride or two, I was ok. Worked on my technique, did not look down, and was having the time of my life at the end. The boys were quite pleased with that event, too, as the laughter was everywhere. 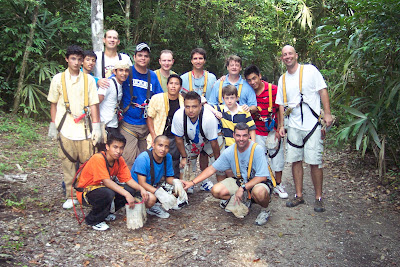 Exhausted, we flew back Sunday night, said our goodbyes to our friends. Some of the boys were in tears – as they tried to express their gratitude for one of the most enjoyable days of their lives. Then we flew back to Dallas early Monday Morning and rejoined our lives – already in progress.

These kids mean the world to me. Some are a few months old, and some are 18. But they all have a better chance than they did before Buckner got involved. Like I said, this is my 3rd trip, and I expected it would not be so tough on my emotions now that I am used to it. But, exactly the opposite is true. Now, that I know the kids – and some of them remember the big, bald, white guy – often called “Calvicie” – it is heartbreaking to feel helpless at times to solve their problems. It is now tougher to know that so many more need to be helped and loved.

I cannot wait to see my friends again. Thanks for reading this.

My blog entry from March’s visit …

Some Video of Zip Lining in Tikal (Not us, but you will get the idea)

Tomorrow, back to sports. I promise.
Posted by Sturminator at 9:33 AM

Always my favorite blogs. I love sports, but rarely do they impact lives.

Thanks for helping to spread hope to places with very little. Helping children break the chains that hold them down. Many blessings on your future endeavors down there.

Love the update on the trip. Keep up the good work.

Don't get me wrong, I love the mindless drops and comedy you guys at the ticket provide. The drops and constant laughing I get on my drive home each day is something I look forward to. But as a Christian, I welcome some good reporting on just good ol' fashion mission work. I know other guys up there do things for charities and all, but this is great stuff man. Glad to hear these kids touched your heart and I'm sure you touched theirs too. Good luck with the work in the future.

kuddos to you and your fellow mission workers for what sounds like an amazing trip.

God Bless what you are doing and thank you for letting us know about it.

Grace and Peace to you...

nice recap. I want to go to south america.

**of course not inferring that guatemala is in south america**

Thanks for sharing, it's a really cool thing you are doing.

Very touching story on your mission trip, Bob, thanks for sharing that. Like the photo intesive look for the blog today. When you were ziplining, were you thinking about Survivor or The Amazing Race?

Great stuff Bob. It's inspiring to read your quest of being "Salt and Light".

Bob, I know you don't share about the trip to get a pat on the back. Nothing breaks my heart more than children in need. I thank God that you are in a place where you can reach out and make a difference.
Truth is you have left me in tears.

People think I'm nuts when I tell them one of the things I miss most about Texas is a radio station...but this is an example of why. The single greatest thing about the little ticket is that you guys are about more than SPOOORRTSSSS...

Thanks for sharing Bob...with both the kids and us readers/listeners...

You're a good man, Bob. Missed you on the show this past week, but it was worth it after reading this blog entry. Thanks for the input on your mission to Guatemala. Sports, and all that implies, is great... but kids are even better. You do great work with both. I salute you!

Thank you, Bob. I appreciate and respect you: you share love and dignity with these kids. Keep on!

Thank you for sharing again about your mission work in Guatemala. More importantly, thank you for making this ministry a regular part of your life. That speaks volumes to many of us P-1s. My family and I spent several years in Russia and continue to go back for summer missions in Russia and Ukraine. By far, orphanage ministry is some of the hardest and most heart-wrenching outreach we do. Just listening to you share yesterday gave me sudden "allergies." Thanks and blessings.