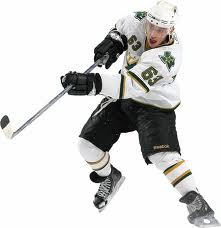 There is some coping mechanism inside us all that tries to move on when a favorite goes away. Especially when it comes to our teams and our players. Invariably, one of our teams is going to make a move. This move is going to be grounded in logic and part of a bigger plan that will possibly make sense around the next corner. However, this move is going to take away a player that you really liked over the years and always gave an effort that you enjoyed. But, that coping mechanism kicks in. And before long, you buy the rhetoric and the explanations from the team and even though you enjoyed his work, you now are on to the next one.

Well, this morning, I am not quite ready to move on and look ahead. This morning, I wanted to write about one of my favorite players to roll through town, Mike Ribeiro, a few days after we all found out he would continue his career in Washington with the Capitals after the Dallas Stars pulled the trigger on a trade to send him away.

Oh, sure, I know all about the warts of Mike Ribeiro. Ribs was one of the worst face-off centers of this generation. For all of his brilliance, the simple fine art of taking a face-off was lost on him. In fact, of the 42 players to take at least 5,000 face-offs in the last 5 seasons, Ribeiro finished 42nd in percentage won (45%). Olli Jokinen and Eric Staal were also worse than 47%, but only Ribs fell below 46%.

He became famous for his long shifts. And the more vital the shift was from an offensive standpoint, the longer the shifts were. It was something that drove fans and media crazy to know that Jamie Benn was watching most of the power play from the bench as Ribs turned a 60 second shift into a 85 second shift if the Stars had the man advantage. Then, with 30-35 seconds left, Benn would pop out as opposed to splitting the 2 minute advantage equally down the middle. It may not have been his fault that Benn was not out there with him, but the shift length became an issue that was never properly sorted last season. In all, 211 minutes on the power play dwarfed Benn's 163. It wasn't all an issue of shift length, but it certainly started there. And when the Dallas Stars tied a modern era low for least number of power play goals scored in a full length season (just 33), then that nit was going to be picked quite a bit.

Those two points will be brought up repeatedly over the next few months to anyone who wants to lament his exit; as will his issues in his own defensive zone and his enjoyment of the night life. But, for me, watching #63 since the 2006-07 season has been great. I have always enjoyed his game and his ability to simply be himself. He scored 407 points in 461 games for the Dallas Stars, and like so many before him, he did it his way. He was skinny, but he was certainly not meek. He would play his heart out and if you challenged him, he would play harder with an edge of anger.

He played through a number of injuries that certainly could have ended his night. His battle this past winter through the puck in his face in Nashville followed by the knee injury against Edmonton in back to back games showed what he was all about. It reminded us of his previous battle scars including the throat scar from a trip a few years back in New York.

But, the biggest attraction to Mike Ribeiro for me was just his love of the beautiful side of the sport. It might have had plenty to do with growing up in a soccer family, where his father perhaps assisted Mike in the creative side of making a play effective and pretty at the same time. He had a knack for creative play that was not taught at the youth levels of hockey and is still not widely loved by the coaches who run the NHL. You could feel the collective cringe on the bench when he would unveil his newest shootout move that included a fair amount of mustard on the hot dog. He might score and make the goalie look silly or not score and make himself look silly, but he was not simply going to fire a wrist shot like everyone else. He just couldn't do it that way.

He might have been a player in Dallas that needed to be coached hard. Once upon a time, the Stars had a similar soul in Brett Hull, but they also had the fiery combo of Bob Gainey and Ken Hitchcock demanding that any sort of free spirit be sewn into the fabric of the team concept and expectations. To Hitch, 45 seconds did not mean 46 seconds, and if he was coaching Ribs, perhaps the shift issues and the decision making would have been molded differently. We will never know.

But, Marc Crawford and Glen Gulutzan were not the type to take on a veteran who needed the occasional scolding. So, they perhaps were never able to get him to understand the difference between a personal and team decision. He was set in his ways and they were not up for the battle of wills, so some of the problems might have not been addressed.

All the while, Ribs would be out there trying to help the cause. His creativity and drive were always on display. His overtime winner against Calgary this year will be the goal that will be the most enduring memory (six shades of sexy were the words of Razor Reaugh), but there were 50 just like it over his time here.

He will be replaced by someone else, and chances are that that new player will always mind the coach and likely won't stay out as late. But, the hockey fan inside of me who loved the creative flair that Ribeiro put out there will always have a spot for him on my team. He made hockey fun and reminded us that trying something with the puck is sometimes a better idea than dumping it into the corner and getting a responsible change. I know the coaches don't want to hear it, but those of us who don't want robots playing hockey very much appreciate it. There are very few players like Ribeiro out there, and I am happy to have watched him here for 6 years.

I will miss the haircuts, the quotes, and the clothes that only he would attempt to wear. I will miss the shootout attempts, the bad attitude when he was challenged, and the behind the back, through the legs, and who knows where else artwork that he would conceive and then execute.

It may not make hockey sense to say this, because he was not without weaknesses in his game, but I will greatly miss having #63 around anymore. They missed the last 4 years of playoffs with him, so his jersey will likely never see the banners, but I will always remember his contributions to my hockey enjoyment.

And now, losing Brad Richards and Ribeiro down the middle and the 150 points that came with them in a typical season, the Stars try to figure out where they are getting their offensive creativity from moving forward. They certainly have their work cut out for them.
Posted by Sturminator at 7:12 AM