What do you say when the Cowboys offensive game-plan goes directly as they had hoped?  In this study, these Tuesdays don't come around very often - so you enjoy it while you can.  It is certainly no easy task in the NFL to write a game-plan on Tuesday and then to look back the following Sunday night and agree that just about everything you tried went as you wanted.

But, on this occasion, against this opponent - a very talented defense from St Louis that was demoralizing offensive lines and causing discomfort for opposing QBs, the Cowboys used their decision making to mesh idealistic and realistic together.

The idea was to run the ball with commitment and conviction.  And then your play-action game can fall into place.  Now, before some of you slap your forehead and call for Garrett's firing because you have wanted them to do this for years, understand that somewhere in the "commitment to running" conversation has to be the idea that if you start the game with three straight "3 and outs", then your commitment was a bad idea, your defense is getting worn down, and your crowd is getting restless.

We don't know where the line should always be drawn between running a lot versus running effectively, but we have discussed the idea that you have to accomplish something early.  Especially if your track record demonstrates that it often does not improve as the day goes on.  Yes, I want to run the ball.  But, if I have 10 carries for 11 yards, the only player getting a lot of morale boosting through his work is going to be my punter.

So, you will see below that the Cowboys ran the ball 34 times on 59 snaps for an insane 58% run clip.  But, you will also see that on the 1st drive, the Cowboys called 6 runs and for 44 yards (7.3 yards per) and then on the 2nd drive it was 4 runs for 44 yards (11 yards per).  After 10 carries and 88 yards, yes, the Cowboys felt good about dialing up run after run after run.  If those first 10 carries were for 18 yards, then I am quite sure they would have deviated quite a bit from this new-found conviction and would have put the game back on Tony Romo in the shotgun.

But, results turned into more reps and on and on it went.  Until you ran the ball 34 times for 193 yards.

Meanwhile, then the passing game appeared to show us that they wanted to be sensible.  Sensible in what they asked Tony Romo to deal with with regards to taking hits - look below to see his 1st half passing chart where all of his throws were underneath.  Quick drops and quick releases to players within 10 yards of the line of scrimmage.  And then sensible in terms of not asking Tyron Smith and Doug Free to do too much in dealing with noted pass rushers Robert Quinn and Chris Long.  On Thursday, we will focus hard on the Tyron/Quinn battle.  It was a good one.

When people talk about a sound game plan - where the major issues always come down to not asking our players to more than they are capable of doing - then, you would have to say the offensive staff passed with flying colors against the Rams.  Some weeks, the test will be much more severe.  But, they made this look easy all day.

It started with good field position, but then, nearly every drive was able to accomplish something.  Good pass protection, successful runs, minimal drive killers (turnovers, penalties, sacks), and all in all not much to complain about as we look at the results.

Here is a fun play to digest before we dig into numbers.  It is the 4th Quarter TD to Dwayne Harris.

He took a few of the S11 snaps on Sunday - especially after Miles Austin had his hamstring issue again.  I do wonder how many in Cowboys meetings are discussing Terrance Williams vs Harris for the WR3 spot, but that isn't what this is about.  It is 1st and 10 at the Rams 24.  The Cowboys have run the ball well all day and here you can see the slot corner (Finnegan) coming to Romo on a blitz, leaving the rookie safety TJ McDonald on Harris down the seam.

The key here is playing on McDonald's training.  Every defensive back is taught to play route tendencies.  And on a corner blitz, he is sure that Harris is going to sit down on a stop route at about 10 yards because he is the hot route.  Harris stutters at that spot, McDonald takes the bait for a second, and Harris explodes past him for the TD.

And this all works because Tony Romo is sitting right on it.  Check it out from the end zone view.

Here is what I love.  Watch at the line as Romo talks to Ron Leary the LG.  He has Leary pulling to sell the play action as a G-Power to the right.  Not sure if that is what Romo audibled into, or if Leary was just made aware that the slot corner is coming on a blitz.  Either way, Leary meets Finnegan, which makes Harris not stopping on the route an easy counter and the Cowboys twisted the Rams blitz into their own poison - because your veteran QB made a simple adjustment and then a perfect throw.

Beautiful stuff from the Cowboys offense.

Here are the passing charts to see what was being accomplished on Sunday.  Intern Tim is back with us this year and he has made some pleasing to the eye charts for us to see.

Blue is a completion. Red is incomplete. Yellow is a touchdown, and Black is an interception. The passes are lines from where Romo released the pass to where the pass was caught. This shows you his release point and where he likes to throw when he slides in the pocket.

Look at the safe underneath stuff in the 1st Half: 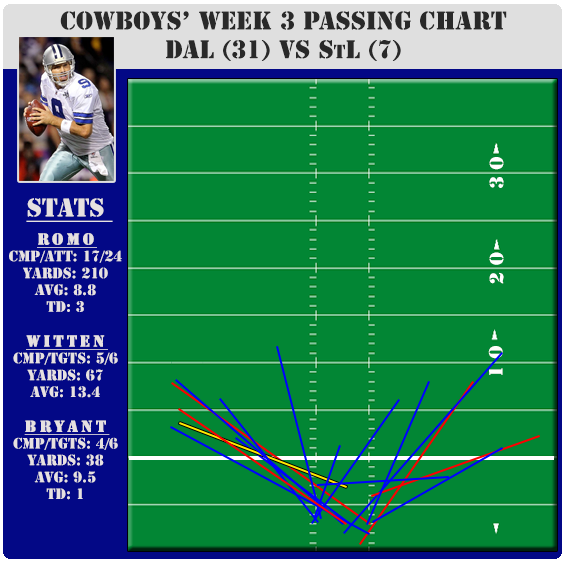 Followed by many fewer, but deeper throws as Romo looked and found the kill shot to both Escobar and Harris in the 2nd Half with the two, nearly identical yellow lines. 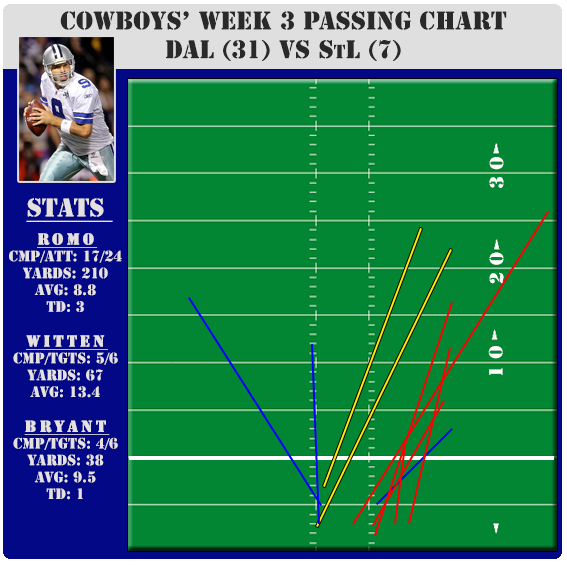 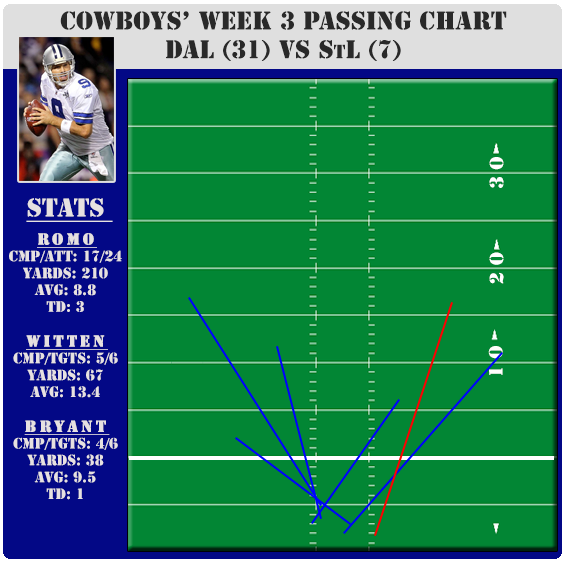 Drive Starters - The 1st play of each drive can often reveal the intent of a coach to establish his game plan. How committed is he to the run or pass when the team comes off the sideline? We track it each week here -

Shotgun snaps are fine on 3rd Down and in the 2 minute drill. But, we track this stat from week to week to make sure the Cowboys aren't getting too lazy in using it. They are not efficient enough to run it as their base, and with a 15%/85% run/pass split across the league, there is no way the defense respects your running game. When shotgun totals are high, the Cowboys are generally behind, scared of their offensive line, or frustrated.

Ah, balance.  Not just run/pass, but shotgun/under center.  Is this the exception to the rule?

And now, a look at the efficiency of each personnel grouping.

Before you study the data below, I would recommend that if the numbers for the groupings are unfamiliar, that you spend some time reading a more expanded definition of the Personnel Groupings here.

Here, we find something else worth looking at as a possible Bill Callahan-influenced wrinkle.  In an effort to run from under center, but without loading the box up with linebackers, the Cowboys finally decided to try what many teams have been doing for years - under center, but 11 personnel.  Let me explain:  If you bring 21 personnel, you show a fullback and the defense thinks run.  12 personnel is 2 tight ends and again, the defense deploys a loaded up box to defend run.

But, 11 personnel under center means you still have 3 WRs and Jason Witten.  You better be in nickel or perhaps dime.  That means that you are taking at least 1 and maybe 2 LBs off the field to defend the box.   In 11, you are likely looking at 5 on 5 or 6 on 6 (depending on Witten's alignment) and therefore, there is more room to move around and less big bodies to avoid.  It doesn't mean it will be easy, just easier.

Meanwhile, 12 personnel was quite efficient on the ground, but a lot of their rushing yards did come on shotgun/pistol runs.

* - Knee Plays are not counted in play calls.


Totals by Personnel Groups on 3rd/4th Down:

As you can see, hardly any production in this category:

St Louis did bring pressure with several corner blitzes, but for the most part, the Cowboys were ready and able. 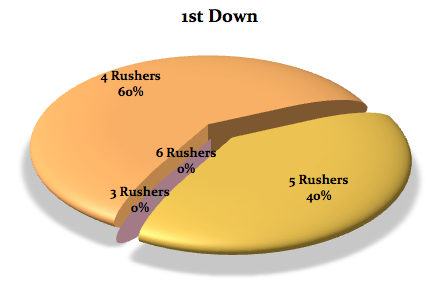 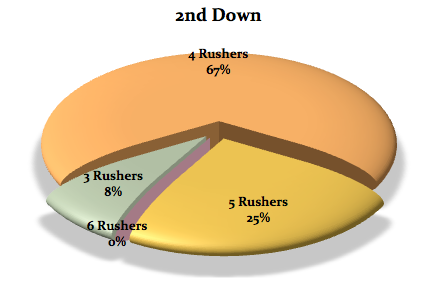 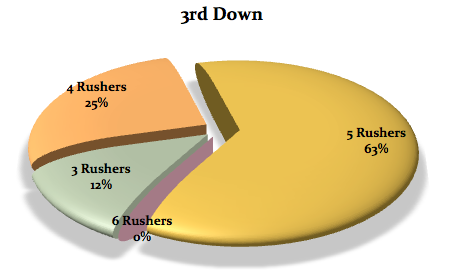 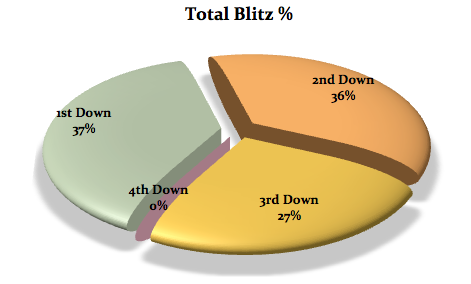 SUMMARY:  Overall, it was a very easy day at the office.  Everything they tried worked well and they were able to take the game by the scruff of the neck from the opening snap until the end.  Now, they must play 2 teams who will likely score plenty of their own, so the Cowboys need to plan on 30 points in both of the next 2 weeks.

But, unlike the Tampa Bay game last year in Week 3 in Arlington which was the ugliest of wins, this was a re-trenching victory that has many on the roster feeling very good about themselves.  And it should.

Posted by Sturminator at 8:47 AM