Without question, the top reason the defense gave the entire organization indigestion in 2015 was a lack of taking the ball away.
We all know how closely correlated turnovers are to winning and losing, and when you have arguably the most disappointing season in franchise history (expectations to reality) and you also have the worst takeaway year in the history of the sport, the two things can often be linked together.
You may recall this paragraph summary from last year's final "Cowboys Morning After" that followed the finale against Washington:

Looking back, it is still hard to believe. And yet, it doesn't really matter if one believes it. It happened. In graphic form, here are the past 10 years of takeaways from the Cowboys' defense: 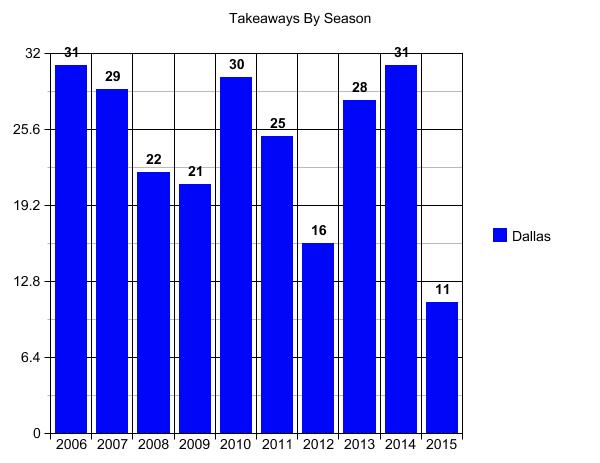 You can see that of all of the mysterious issues of 2015, this is a stat -- the lack of interceptions and fumble recoveries that cannot be blamed on Tony Romo's collarbone, right?
Well, actually ...
Back after Week 8, we talked about one item that clearly seemed to explain how all of the issues are tied together -- and I wanted to update those numbers to complete 2015 this morning.
This theory actually has been pushed forward by my radio colleague, David Newbury, who loves the sport and looks at stats and film as much as I do. It goes like this:
In 2014, the NFL had 32,784 plays (which tells you that with 32 teams, each defense faces about 1,000 snaps a season). In that total, 19,094 passes occurred which resulted in 450 interceptions and 1,211 sacks if you total up the defensive accomplishments.
But, here is where game theory comes in -- if you divide those 32,784 plays into two categories, you will see the stats begin to tell you a story. The categories are: 1) plays in which the defense is ahead by four points or more and 2) plays in which they are not. If you simply divide it into those two, you see how the game is different for a defense with a lead of more than a field goal.
So, now, look at those 32,784 plays divided into those two categories:

Stay with me. There is a lot here. But, look, the top row shows normal situations. The bottom row is what happens when you get to play defense against an offense that needs points. Look at the run/pass balance. When game is neutral, it is nearly a 50/50 run and pass split. When you fall behind, it turns to 67/33.
Now, look at the number of passes for a team that is behind. Just 8,352 passes (43 percent) in a league that threw 19,094 times. But, that 43 percent accounted for 54 percent of all interceptions (241 of the 450) and almost 50 percent of all sacks. That is incredibly disproportionate and shows a few things.
1) Offenses clearly are forcing the ball into spaces more. They need points. They have to get more aggressive.
2) Newbury has this one: "To me, it's more about the D-line being able to go get the QB without worrying about stopping the run. The offense is forced to throw more and run less. They throw 67.4 percent of the time when losing by four points or more. Look how balanced the offenses are when they are winning ... And teams abandon play action and sprint-outs when they are losing. The QB stays in the pocket more, thus the D-line knows where he's going to be before the ball's snapped. Heck, think about what Romo went through when opposing defenses knew he had to throw the ball. Defenses weren't honoring the run. They were pinning their ears back to get to Romo."
So, if the numbers prove that you need a lead to get most of the turnovers in the league, then it stands to reason that we have been looking at takeaways wrong all this time. Maybe it isn't that teams are good because they get takeaways. Maybe it's that they get takeaways because they are good. Do certain teams always get takeaways because their offense puts them ahead, and thus the opponent has to do things they are not comfortable doing?
How does this apply to the story of the 2014 and 2015 Cowboys?
In 2014, the Cowboys defense was on the field for 978 snaps. In 2015, it was 997 snaps. Roughly, that is just one more snap per game -- 61.1 per game in 2014 to 62.3 in 2015. Negligible. There is almost no relation whatsoever to this ridiculous theory that the 2014 team never let the other team on the field. As you can see, they did at nearly an identical rate with Tony Romo and DeMarco Murray as did last year's team.
No matter how great your offense is, the other team gets the ball back every time you score. In a make-or-take it league, this would make more sense. Unfortunately, that only exists on basketball playgrounds.
But, here is where 2014 and 2015 differ. And this is quite important:

You certainly didn't need an eye-catching graphic to show you that the team was never ahead last season, but if we believe that most interceptions and sacks happen when a team is ahead and the other team has to force the issue with determined passes and the defense not worrying about your running game, then we can quickly see that the Cowboys defense was never in this position -- just 16 percent rather than 49 percent.
We could run the numbers of how this played out -- but given that the Cowboys were never ahead all season long, there is almost no data. The best example was Sam Bradford throwing into the Cowboys secondary in Week 2 and throwing picks. But, those are the only three turnovers the Cowboys got from advantageous spots all season. Five of the 31 sacks came from those small spots, too.
The pass rush actually improved significantly. They had 31 sacks in 506 pass plays this past year -- one sack every 16.3 pass plays. In 2014, it was 28 in 558 -- one sack every 19.9 pass plays. That is a very significant improvement to where they are almost at league average. In 2014, they were not close to the league average, despite being in a spot to get a ton of sacks. But, in 2015, despite being a better pass rush team -- they never were able to force teams to throw.
So, we circle back to the start.
How does the offense help the defense? By getting a lead and forcing other teams to respond. They will still get 60-65 snaps, but if more of them are passes, the turnovers return and the sacks add up if everything else is equal. And that is specifically how this should work.

Posted by Sturminator at 8:29 AM