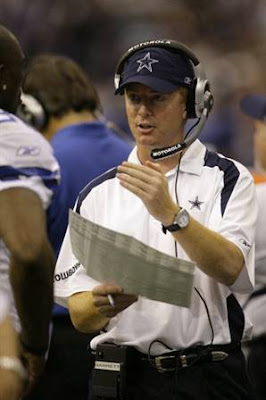 Every team in sports has someone that is just in their head. They fear no man, but when it comes to playing in this particular match-up, they would much rather avoid playing them again because for some reason, they don't like their own chances before they play the game.

It is my submission to you, that when Jason Garrett has nightmares of the NFL variety late at night, he sees the Vikings front 7 standing over his bed.

They dominate on the film he looks at. They seem to have an answer to every question he thinks to ask of them. Like a boxer, an offensive coordinator can lose the fight on his walk to the ring.

I arrive at this conclusion because the two teams have faced off twice in the calendar year 2010, and both times it seems that the game was decided during the week - when Garrett and his coaches were designing that week's game plan. It told us that they cannot call whatever they want against that opponent. They would not be able to win man vs man. So, they better try to skin this cat another way.

So, the bad news is that the Cowboys seem to leave a good chunk of their playbook at Valley Ranch because they know "on their way to the ring" not to even try it against his opponent.

The good news is that Garrett is smart enough that it did almost work.

Now, before you get all excited that it sounds like I am defending Garrett, let's remember a few things about his job.

It is his job to diagnose his team and his opponent. Then, it is his job to build a recipe that has a chance to get his offense in a position to win the game at the end. If he thinks that a particular part of his scheme has no chance of being successful, then he should not waste valuable snaps proving it to you and me in the battle. He has to get his analysis right, and for much of Sunday afternoon, it appears that he did.

He used a number of quick hit passes, mixed in with his run. He tried to run, but in his mind - his Offensive Line could not open up enough holes to expect the running game to have extraordinary success over the course of the game. We see 28 carries for 94 yards (3.4 per carry) but the truth is the Cowboys ran for 25 carries for 63 yards (2.5 per carry) when you subtract the 3 runs from Tony Romo of the scramble variety. There can be little blame for the way Garrett attempted to balance his offense. They tried 25 different running plays and had a long run of 6 yards twice. Otherwise, it was a series of 1 and 2 yard gains.

He then obviously did not like the pass protection match-ups. In the NFL game, defensive coaches understand that they have no chance of covering receivers for very long with the rules as they are, so if we are going to slow down an offense like the Cowboys, it all is going to have to be focused on their pass protection. Like several other throwing teams in the NFC (Chicago, Green Bay, Minnesota, Philadelphia) if their QB has time, they can put up huge production. But, they are sabotaged because they cannot consistently when the 5 vs 4 battle in the pass protection game.

Jason Garrett looks at the stats and sees in 3 (Chi, Hou, Min) of the first 5 games, his offensive line has given up 0 sacks. In a fourth game (Wash) they only gave up 1. A casual fan looks at that number and says the Cowboys are doing a great job of pass protection. But, Garrett knows what we now know. They cannot pass protect well enough to even try some of their offensive concepts. He saw in small doses what Julius Peppers, Jared Allen, and Brian Orakpo can do against his men. And he is not going to give them a stage to find out if he can help it.

So, where does that leave us? A team that cannot depend on neither their running game, nor their pass protection? It leaves us with a team that must stop looking at their OL as anything more than a liability. The Flozell Adams decision last spring should be the first of several decisions to cut ties with players who cannot accomplish what an offensive line must to be successful.

Perhaps it is cumulative age or wear and tear, but Garrett is telling us each week that he is working with an offensive line that is holding his offense back. He will get blamed and so will his Quarterback for this team's lack of success, but those who are watching know that there very few options for an OC and his QB when simple blocking is just not something this team can accomplish for 10-play drives.

Lucky for them, they don't play the teams as good as the Vikings front every week. But, when they do, I suspect they know they only have a puncher's chance when they are walking to the ring until this offensive line situation is fixed.

And you know what? Despite all of this - they almost pulled it off. Given the circumstances, I think Jason Garrett did a pretty good (not perfect) job. But, pretty good didn't get the win. They made one fatal error that cost them the game on offense. That 4th Quarter interception was the undoing of all of the good.

Let's look at the Data from the loss in Minnesota:

You will see they did a great job of limiting the 3rd Down and longs. 5.7 to go on 3rd Down is a perfect spot. You can have plenty of success there, and the Cowboys moved the chains quite a bit.

How about Drive Starting plays? This where you often reveal your intentions for the game. On 7 of the first 9 drives, Garrett called a run play to start the drive.

If we are going to criticize anyone in the play calling community, we must have some pretty good ideas of what they did not do. My one thought is that I would have liked to see a few more max-protect shots down the field. But, we must also look at the game. The Cowboys were controlling the possession and the time in the first half. In the 2nd half, they had lousy field position and 2 different 3 and out drives that both started inside their 20 (perhaps not a great spot on the field to get too fancy in a tight game).

Drive #3 of the 2nd half was the TD drive with Dez Bryant (taking a shot down the field). Drive #4 was the fateful INT, and Drive #5 was another 3 and out because Dez pulled off the slant on 3rd Down. And aside from the absurd play to end the game, that was all they had in the 2nd half. 23 plays with 17 of them on your end of the field - often in poor position.

Totals by Personnel Groups on 3rd/4th Down:

The above numbers reveal that the Cowboys were astonishing on 3rd and 4th and short. They were 3rd and 3 yards or less 9 different times. Of those 9, they converted 7 First Downs. 6 were run plays (5 to Barber, 1 to Romo). When they passed on 3rd and short, they hit Witten for 17 yards, but also had 2 other interceptions - both intended for Jason Witten. If you follow this research, one of the most horrid numbers from the first 5 weeks is the inability for Romo and Witten to hook up on 3rd Down. Which leads us back once again to that play that cost the game. 3rd and 1 in the 4th Quarter. Make sure you see our breakdown of that particular play on the video blog from today.

For a more expanded definition of the Personnel Groups, click here.

Make sure you check use these numbers when you look at the video breakdowns that will be posted later today.
Posted by Sturminator at 7:24 AM

I heard Flozell is doing pretty good in Pittsburgh, giving up only one sack and maybe one false start.

Of course he plays for the Steelers, but, if the stats are true, it looks like he still has something left in the tank.

Hi Bob...thanks for your analysis. It's always very insightful. I agree that Garrett's playcalling was definitely hamstrung by the offensive line. It did feel like the Cowboys offense was playing scared though. Sometimes you just have to trust your players to execute. Then again, we are talking about a team that doesn't execute very well.