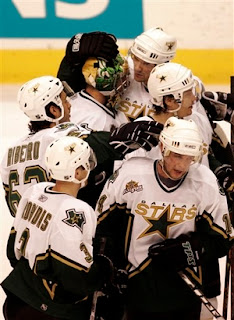 • I can’t say this very often with this group of Dallas Stars, but it fits this morning: I am proud of those boys, and that effort they put out there last night. This is a team that has earned a reputation of going quietly into the night in the last several playoffs. They were not going to let that happen last night. Does it mean that there is something different about this team when compared to the recent versions? Time will tell. But for the first time in years, the Stars were determined to win a big playoff game and then accomplished that on enemy ice.

• Marty Turco has consistently been 2nd best for the Stars during his playoff career, but a 35 save shutout performance will easily qualify as his finest springtime hour. With several big saves and a giant supply of poise and composure, there is hope that “New Marty” has emerged just in the nick of time. It was his first shutout in the playoffs, and also the first time you got the impression that he was taking the game by the neck and making it his own. Nights like Friday make you remember what we thought Turco was capable of all along. Now, before we rush him to the Hall of Fame, let’s see what he does with his success. Game 2 in Round 1 is not the stuff of legends, but for Marty, it is a long overdue start.

• When you look at this group of Stars, you must draw the line in time on the day that Ken Hitchcock and Bob Gainey left Dallas. Shortly thereafter, Ed Belfour, Joe Nieuwendyk, Jamie Langenbrunner, Derian Hatcher, and others all left town, too. This new group is the group that has many stats working against it. 1-7 in Playoff Overtimes. 1-3 in playoff series. Before last night, 8-15 in playoff games. Here is another stat that amazed me, before last night, the Stars had been down 0-2 in each of the last 3 series. Just impossible to believe, right? It has been so long since this team has been even competitive in a series against a team not named Edmonton. Try the 2000 Stanley Cup Finals versus New Jersey! Time flies when you are playing mediocre hockey.

• Was it just me, or did everyone think of Guy, Keane, and Verbeek when they saw the fine work of Halpern, Barnes, and Lundqvist? That line is consistently matched up with the Sedins and as far as I can tell are doing a wonderful job. Not only are forcing the Sedins to work in the offensive zone, but there are many shifts where they force them to play defense. And who would imagine in a 2-0 game that you would get both goals from your checking line? And in game 1, Barnes could have ended the game on several occasions. I know we will have time to think this through later, but with Barnes as your only significant unrestricted free agent this summer (besides Nagy) I would see about extending him right now. He is so valuable. They really appear to be the heart of this team.

• Kevin Bieksa is quality. I was not real familiar with his fine work, but there is no question he can play.

• Why did Mike Ribiero play so little on Friday (7:36)? I am told it was a simple benching. Very odd.

• You sure get the impression that scoring first means plenty when these two
teams play. Both know how to wear you down when they play with the lead. That is why you must start each game with all guns blazing.

• Mike Modano’s back hand pass to Lunqvist was beautiful. But, what was curious on the Stars second goal was why 3 Canucks went to Barnes, leaving Joel wide open in front of the net.

• The Stars need the power play to get cranking up in Dallas. They went 0-7 on Friday, and need to make Vancouver pay. Special Teams always seem to decide these things in the playoffs.

• I wonder if Roberto Luongo is feeling pressure. Let’s not forget this is his first swim through the playoffs. The weight of Canada seems to rest on his shoulders, and the more you can make him consider his vulnerability, the better chance of making the red light activate behind him. Isn’t it fun to consider the other goalie’s mindset?

• Is it just me or is Antti Miettinen turning abrasive? Seems that Steve Ott and Nik Hagman are rubbing off on him. Good.

• So now, we look ahead to Games 3 and 4 in Dallas. I may be catching playoff fever. I wanted these guys to show me something, and through two games, they are showing me plenty. Now, can they take charge in this series on home ice? I am eager to find out. There is one way to separate yourself from the 2002-2006 Dallas Stars, and that is to win a playoff series against a good team. They continue their assault on that prize on Sunday night at 8:30.
Posted by Sturminator at 10:50 AM

There were several times last night where I could just not believe how in control and overpowering our tenacity was versus what I always consider a very tough Vancouver team. They looked like they just finished a 4-overtime game and we looked like we'd be resting 4 days. More of this please, Stars!

I have to admit - the Stars from last year scarred me to the point that I wasn't able to enjoy the game last night. All I could think of when the third period started was how much it was going to suck when the 'nucks would inevitably score 2 late 3rd period goals and then steal the game in OT.

Great game by Marty all around. You wonder if his career was on the line in that one - if we lose, does Tipp consider going with Mike Smith when the series comes back home? Now we'll never know.

I was also scared to death in the 3rd period last night, thinking of the past few years, and how they could screw it up. But, no, the Stars took complete control, even when Luongo was pulled. Great effort!