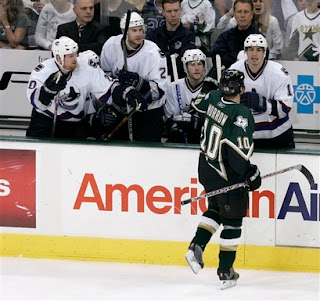 Above, Morrow takes on the entire Canucks bench on one leg. O Captain, Our Captain.

As one of the chief promoters of Ice Hockey in the DFW media, I was like a proud parent last night. Sure, it was only 4 days after I left them for dead, so I might not be up for “Father of the Year”, but they kept fighting and then winning in the most unlikely scenario. They cowboyed-up, and crawled out of their grave. They showed heart, resolve, fight, grit, and guts on their way back in this series. And now it is 3-3 after two monster performances from the Dallas Stars that have Vancouver on their heels.

Win, Lose, or Draw in Game 7 (and there will be no Draw), I congratulate these guys on one things. They have won back my respect, and I would suggest they have won back your respect, too. Last night’s 2-0 win, combined with Thursday’s 1-0 victory, put the Stars just 60 minutes from advancing a playoff series where everyone had them dead.

The following are my notes from the big Game 6:

• Marty Turco is a different goalie than he was 2 weeks ago. How? Well, how do you now even suggest that Mike Smith is a viable option for this team. And maybe more importantly, after watching this series with your own eyes, how do you consider goaltending a weakness? I realize he has the biggest of Game 7’s straight ahead, so the opinion is subject to change if he loses 5-1 tomorrow, but my perception of Marty Turco is that now he is ready for the big stage. He has done quite a bit in 2 weeks. I am not saying he is Broduer or Hasek, but I am saying this team may not have to cringe about what stands between the pipes for them. 3 playoff shutouts in one round? Could you imagine being a goalie with 3 shutouts in 1 round and may still not advance? That seems nearly statistically impossible.

• Brenden Morrow is my new hockey hero. He rises to the occasion like a captain should. He gets mad. He gets even. He plays like this is the only thing that matters to him. He is perfect for this role. To see him skate over to the Canucks bench on one leg, after that punk Burrows offered a cheap shot, was the stuff of legend - considering his Game 5 OT goal that kept the series moving. There can be no further questions about his capability to be this team’s captain.

• Mike Modano scored a big goal, but more important to me, threw his body around, took on Vancouver defensemen with the puck, back checked like a Selke winner, and just dominated the ice. Mike, can we do it again Monday?

• So, this, according to my notes, will be the first Game 7 for the Stars since those time-capsule Game 7’s against Colorado in 1999 and 2000. If you remember those nights, you remember some of the most classic hockey ever played in Dallas. Sadly, we will all be pressed against our television screens for this one, but how does 2-1 sound? Or, 1-0? Which goalie will rise above the other? Surely, in the 3 stars of the series, Luongo and Turco are assured two spots, but the rank will be determined by Monday Night.

• I am told that for the health concerns, Morrow is fine, and Zubov is the real question about his availability for Monday. As is the usual case, nobody is sure what Sergei did or what his injury is. But, I think we all realize how much that would hurt not to have him out there.

• Eric Lindros was so good last night. What a bully out there. If only he was here since Game 1…What a difference a week makes in his perception, too, eh?

• Roberto Luongo is awesome. That game could have really been out of control last night if it wasn’t for him. But, how will he handle a Game 7? Nervous, Bobby?

• Sorry, but I will not be an unbiased member of the media on Monday night. And, you may get a chance to see overly depressed hockey Bob on Monday night if things go poorly, but I am thrilled for these guys that they fought back. I will be prouder if they advance. They will keep jobs, they will keep reputations, and most importantly, they will keep hockey relevant in Dallas through the summer. Those of us who love this sport really needed these last 4 days to solidify hockey’s place in this sports city.

I am dreading having to hear the mavs crap for 2 months.

Doctor Jones said...
This comment has been removed by the author.
2:26 PM

I hope I'm hearing mavs crap for the next two months, but boy are these stars leaving a smile on my face.

I'm in college out in Abilene so I don't get the opportunity to go to games often but I went to a Stars game over Christmas and sadly I have to say my brother and I left after the second period out of boredom.

This coming from a kid who used to play Hockey leagues growing up and not owning a Troy Aikman or Pudge, or Jason Kidd jersey, but a Modano jersey. (you understand what I'm trying to say)

I've missed how the city used to once care about the Stars...like they did when they first came to down from Minnesota and like they did when they began their first playoff runs against Brett Hull and those pesky Blues. You Bob, and most importantly the Stars have helped regain my city's (I think) respect in the post-strike era.

Good blog. Now we just need to post a You Tube video of Morrow's bravery. *ditto on the slow clap*

Hockey has been so irrelevant for me the past several years but watching last night has got my dead hockey pants finally on fire again.

I third the *Slow clap*

How bout that kid with the stuff poionted on his chest and back! Did he make Sportscenter, or at least Youtube?

Hockey died after the strike for me; and really had a hard time getting back into the game. But after attending the game on Saturday, a team effort like that will definitely have me (the spare Hockey fan) glued to the tube