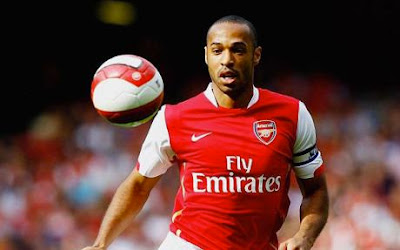 Finally, we are all back and in place for another EPL Fun bag!

This doesn't often happen, but one of my very, very, super, duper favorite players of all time is in Frisco Thursday night. You have to come see FC Dallas play my main man, Thierry Henry.

Is he as good as he was in 2001 when he was amazing the world at Arsenal? No. But, he is still better than anyone you have ever seen in person, most likely. And if this youtube cut below doesn't prove he is awesome, then you didn't watch it.

By the way, it should be noted that FC Dallas is on maybe the best roll they have had in Franchise History. They are 10-2-11 and are unbeaten in 14 straight. Their last loss was in May. So, this is not only a great chance to see a stud of world soccer history, but also the possibility of a great match, too. FCD might be for real this season.

And to prove he still has it, here is the goal he scored Saturday . Sweet.

With football returning, I know your time for soccer might not be at the same level it was in August, but I would encourage you to watch the best soccer show on television which is the "Premier League Review Show" which is on Fox Soccer Channel every Sunday in Brilliant HD. It is a chance to see all of the best moments of the weekend, and you don't have to worry about watching 4 full matches in the middle of your college football season.

On the other hand, if you hate college football - watching 4 matches may be quite enjoyable.

* Only 2 road teams won a match this weekend. There is no doubt this is one of the tougher things about the English League (or any level of big time soccer). Winning road games is just too difficult it seems, and only Chelsea and Blackpool were able to get it done over the weekend.

* Blackpool remains the darling of the EPL, as a newly promoted side after a 40 year lay-off from the top flight, they sit in 4th place in the table and have 2 very impressive road victories already. The win this weekend at St James Park is both stunning for them and causes us great concern about whether Newcastle will be able to stay up this season.

ANYWAY, United is dealing with similar massive debt as Liverpool is, and while it is not quite as dire, we are seeing the overall quality of their squad eroding. They sold Cristiano Ronaldo last summer, and never really replaced him with much. Then this summer, they were very quiet. And it appears they have very few match winners in the squad these days.

Which leads us to the video below: Everton with amazing goals in stoppage time to earn a draw. And then, the whistle blows on Fergie time as Everton is going for the winner. I will explain Fergie time in a future episode. Check the highlights.

The above implosion of United dropped 2 more points that should not have been. Add that to the two dropped points at Fulham that should not have been and Manchester United is already dangerously close to the unnecessary dropped points tally for the season. You see, you already plan to drop some points in matches against Arsenal, Chelsea, Manchester City, and maybe even Liverpool (like the NFC East, it is best to assume a split, or even 2 draws - which totals 4 more dropped points) so when you start looking at that then you understand why there can't be many of these moments and still stay close to Chelsea.

Chelsea has played 4, won 4 - and although their opponents have not been that strong, they have destroyed pretty much all comers.

The above video is Arsenal football. People often ask me about styles of teams and what each team tries to be. Well, most don't have defined styles from year to year. But Arsenal does. And above, you will see 25 passes in a row that leads to a goal. It is almost like they are mocking poor Bolton. Such skill. And keep in mind half of their squad is out with injuries, which is another stereotype of Arsenal - that their beautiful players are also made of glass.

Here is this weekend's slate - ALL TIMES EASTERN!

Yes, only a few weeks since Liverpool's last humiliation in Manchester, we have to go back. This time, United will attempt to light LFC up like a Christmas tree, and I wouldn't bet against it.

zags_12 do you think Fulham will be competitive this year since they are off to a good start. Or will they flame out?

Me: I think Fulham will be top half of the league. But the Zumora injury kills them. They will scratch and claw, but 8th or 10th is about the best they can do.

DGE9901 will Clint dempesy ever move up too a bigger club?

Me: I need Deuce to hold down a spot in the starting 11 there before we send him to a bigger club. I need my USA boys playing all of the time and not riding the bench in some outlying outpost. Do you hear me Jozy?

Seth_Crosland this is a stupid question, but is the home field advantage in the epl greater than it is in the NFL?

Me: Interesting. I think it is very similar. The problem is that many teams play for draws on the road. With 11 men behind the ball as they say. They are not trying to score - but rather trying to prevent being scored upon. Which can make for boring football.

buccophan Man U, looked horrible, esp Rooney against the Rangers. Should Sir Alex be worried?

Me: Sir Alex is in this whole thing for 2 reasons: EPL Trophy and Champions League Trophy. And yes, from that perspective, eh should be quite worried.

1310SpareP1 Ruud van nisterooj or Henry overall in their primes? Who's better

Me: I love Ruud. He was awesome for United 6 or 7 seasons back. A true post-up Power Forward, but Henry was a stinking genius. Big, Strong, Fast, Creative, and had the ability to score the biggest goals at big times. Henry.

EPL newbie, following MCFC. Loving it so far, and really enjoy your EPL funbags. Hope you can find the time to keep doing it! Could you touch on styles? I hear Arsenal plays an “open, attacking”, fun to play style, while I have read in some places that Mancini is conservative and his style may not fit the talent that has been assembled at Eastlands. I know there are different alignments, the 4-4-2, and the 4-3-2-1, etc., but don’t really understand the strategy behind them. Could you give some tips for what to watch to understand an aggressive vs a conservative style?

Rory, I appreciate your kind words. But, when it comes to tactics in soccer, I feel like I am not as knowledgable as I would love to be, and not able to dedicate my time to it to get there. I can now see aggressive and passive, but knowing the formation styles is just not my gift.

But, I have found an awesome website that breaks it down. I read them constantly, and it makes my brain bigger. It is Zonal Marking.net . Bookmark it and enjoy. It is really quite awesome.

Email ThisBlogThis!Share to TwitterShare to FacebookShare to Pinterest
Labels: Premiership

What is the american football equal to zonalmarking.net?

Bob, thanks again for the great column and for some Arsenal love!