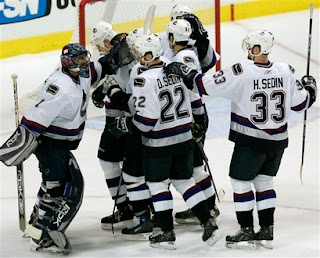 Hockey Depression has arrived, as the Stars fold....AGAIN.

I would hope that people enjoy my playoff game notes because maybe, just maybe, I will know what to say about the situation the Stars find themselves in. Well, I apologize, but I have no definitive theories on why the Stars are where they are yet again. Now, before we look at the big picture, let’s remember that this thing isn’t completely dead. 3 games to 1 is very bad, but not death for the 2007 season. Death arrives the next time the Stars lose. Which by most accounts will be Thursday Night in Vancouver.

I have my normal playoff game observations; Morrow and Ribeiro were really good. Modano was invisible again, Turco gave up the lead exactly 2 minutes after Sydor tied it up, and we can only wonder what might have happened if that puck had made it over the line….But. Here we are again.

So, who shall we blame for what appears to be another playoff meltdown? I think the better question is who should not be blamed?

Doug Armstrong, GM: We always say it starts at the top. Well, in the salary cap age, the owner could now be a gifted chimpanzee, so let’s start with the man who buys the groceries. The kids are average – there is no talented young kid who carries this team at all. The veterans look old. The Lindros for Arnott exchange was laughable from day 1. The Turco and Modano contracts look like a bad idea now, and the Nagy trade looks even worse. I think the world of Doug Armstrong, but the proof is on the ice. And the ice tells a story of a team that cannot win a home game, can’t win a overtime game, and recently can’t even win two games in a series.

Dave Tippett, Coach: I think he is a fine coach. But, I am not crazy about the way he has used Mike Ribeiro. Ribeiro is one of his best weapons, and last night in a must win game, he had him skating with Steve Ott and Antti Miettinen – quite possibly the two least offensive wingers on the team. Last year, he buried Bill Guerin on the 4th line for most of the season, and took him off the power play which is similar to only using Terrell Owens to run block. When scoring is a major deficiency, I need my coach to use all of his scoring assets in a reasonable position. I would tell you that these decisions are proof that this is not being done all the time.

Mike Modano, Jere Lehtinen, Faces of the Franchise: They have done so much good for this franchise and for this city that it is borderline illegal to suggest that these guys are not getting it done, but here is the reality. They are not close to what they need to be in the last several playoff runs. 2 or 3 goals in the last 18 playoff games from the two you depend on most to light the lamp is just flat out unacceptable. We look everywhere else first, but let’s be honest: They must be the best players on this team or the golf season looms. And the Modano foursome is about to be called to the first tee.

Marty Turco, Goaltender: He is clearly playing his best playoff hockey, but that doesn’t say too much. He allowed two back breaking goals at just the wrong time. The first goal was scored as Turco flopped around like a fish out of water. The second goal was another horrible rebound into the middle of the slot which Trevor Linden pounded home. Turco has raised his game, but still doesn’t know how to close the deal. In my mind, he will forever be compared to Ed Belfour, and in that conversation he finishes a distant second. But, with a huge contract that contains a no-trade clause, I don’t know what they can do.

The entire team: The Stars don’t know how to win. They just look lost when it comes to the most important part of the game. I don’t question heart or effort. But I do question what is between the ears. They seem to lack composure. They seem to have puck panic. And they do the opposite of rising to the occasion.

If you are Tom Hicks, how do you not sharpen your sword today? This has happened 4 seasons in a row – going out with a whimper. Game 5 may determine jobs.
Posted by Sturminator at 9:10 AM

It would have been nice last season if Willie Mitchell played like he is now.

The goal the Stars did score is a perfect example of what they should've been doing the entire game. As there been a better screen in Stars playoff history than the one made by Morrow?

Where's the coaching? Why aren't they putting guys in position to succeed?

And how can a vet like Modano take two days worth of criticism for not showing up and then put up zero SOG?!

Just checking in to see if I'm still the only one worried about Golden State in the first round. Everyone enjoy getting absolutely Pimp-Slapped by 29 last night?? Sure it was the J.J and Ager show, but sheesh!

Attention Hockey hating hicks: Don't read it if you don't like it.

Bob: I feel you dude. It's amazing how much more defeated I can be with each loss. I'd like to think that I won't be as defeated on Thursday, having not witnessed it in person like last night and Sunday.

And yes, concerned about GS. But Avery doesn't seem worried, and he's my leader.

I've run out of superlatives to illustrate my frustration with this team.

This team is 2-8 by my count in their last 10 home playoff games.

One was a 5-2 loss to Colorado in Game 1 last year. The other seven were all one goal losses. Last night was the first one goal loss in regulation.

This team seems like it's so close. Yet, so far away. And the near goal by Ribs late in the game is a microcosm of all this frustration.

Who knows, maybe this team can pull off an unbelievable comeback. I'm not counting on it, but I'll by the channel as long as possible Thursday night.

Tom Hicks blew this team up prematurely a few years ago and now between front office, the coach, and players, you have a potential all-star team scattered around the league.