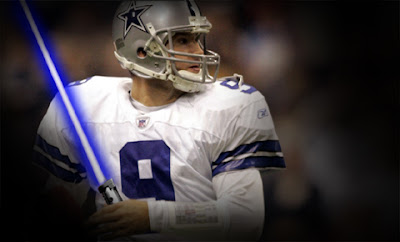 Romo’s ride 1 year after it began …

Entering his second Thanksgiving Day game as the starter, Romo leads the NFC with 27 touchdown passes and is just two off tying White's Cowboys season team record set 24 years ago. He is the NFC's highest rated passer (105.6) and has thrown for 2,848 yards, second in the conference to Green Bay's Brett Favre.

Including last year's Thanksgiving Day win, Romo has thrown 38 touchdown passes with 21 interceptions for 4,401 yards in the last 16 regular-season games. During that span, he has six games with at least three touchdown passes, including four in Sunday's win against Washington, and seven 300-yard passing games.

Since the Cowboys' only loss to New England, he has thrown 12 touchdown passes, tying him with White for the second-best four-game stretch by a Cowboys' quarterback. Don Meredith had 14 touchdown passes in the first four games – all wins – in 1966.

"Tony's seeing things well," offensive coordinator Jason Garrett said. "The best thing he is doing is when the opportunity is there to make a big play or a small play he's been able to make it. He made a lot of big third down throws [Sunday] and obviously the big plays for touchdowns. There's not been a lot of, 'Aahh, we had it, but we just missed it.' "

Coach Wade Phillips did not watch last year's Thanksgiving game as San Diego's defensive coordinator and did not know much about Romo before coming to Dallas. What has impressed Phillips the most is not Romo's quick release or improvisation, but how he has handled the spotlight.

"I think it's very hard being the quarterback of the Dallas Cowboys," Phillips said. "They've run through several of them since the great ones, and there's a lot of pressure on them."

New England's Tom Brady and Indianapolis' Peyton Manning, two of the NFL's best quarterbacks, know that pressure, too. They have been the most valuable player in a Super Bowl. They have set records or are on pace to set records.
Part of their greatness is their consistency.

"I can't speak for everybody on the team, but I wouldn't trade him for those guys," tight end Jason Witten said. "He's still got a lot to prove in that aspect, but the way he makes those plays consistently, he's well on his way to being great."
That could not have been said entering last year's Thanksgiving Day game.

Albert Breer breaks down the tape of the Redskins game …

Feature on Eli Manning that is gold …

Eli Manning is much better than Dave Brown, not nearly as good as Phil Simms and so far about the same as Kerry Collins.

So, where does that leave the Giants?

It's clear after 48 regular-season starts and two more in the playoffs that Manning is not a top-five elite quarterback, which is what the Giants thought they were buying when they gave up all those draft picks to the Chargers, who wanted Philip Rivers anyway.

Manning's mediocre performance in last weeks crucial game against the Cowboys, in which he was outplayed by Tony Romo, who was not even drafted, has served notice to the Giants: This may be the best he's got. Where he ranks in the NFL has become a hot topic.

In the last few days I polled three general managers and a vice-president of player personnel and asked them to list their top quarterbacks in order and stop when they got to Manning. The list is not a lifetime achievement award and not based on potential. It's simply who are the best quarterbacks in the NFL right now.

Just one member of the panel had Manning in his top 10. All had Pittsburgh's Ben
Roethlisberger in the top five. The Giants would have taken Big Ben if they couldn't complete the trade for Manning,

The Giants thought they were getting a star. What they've got is a complementary player dependent on all the pieces fitting neatly around him. He doesn't have great instincts and is not very creative.

Still, he's better than about two-thirds of the starting quarterbacks - which says a lot about the lack of quality at the position - and unless the Giants collapse, Manning will be 3-for-3 taking the Giants to the playoffs as the full-time starter.
If Collins, Brad Johnson and Trent Dilfer can be Super Bowl quarterbacks, eventually so can Manning. But he's a second-level quarterback who is too inconsistent for a player with his experience.

Speaking of QB’s – Vick checks into the Big House …

In an apparent attempt to speed his return to football, Michael Vick began serving time in prison yesterday, more than three weeks before he is scheduled to be sentenced after pleading guilty to federal dogfighting charges.

Vick, the star quarterback of the Atlanta Falcons, turned himself in to United States marshals and was brought to the Northern Neck Regional Jail in Warsaw, Va.
Vick is scheduled to be sentenced by United States District Judge Henry E. Hudson on Dec. 10 in Richmond, and by beginning his jail time, he will be credited with time served. According to the sentencing guidelines, Vick faces from a year to 18 months in prison.

Hudson ordered the marshals to take Vick into custody because he “has indicated his desire to voluntarily enter custody prior to his sentencing hearing,” according to a court document.

On Aug. 27, Vick pleaded guilty to felony conspiracy charges stemming from a dogfighting kennel being run from a property he owned in Surry, Va.

N.F.L. Commissioner Roger Goodell suspended Vick indefinitely and has said he will not make a decision on Vick’s future with the league until all legal proceedings are concluded.

Billy Martin, one of Vick’s lawyers, said yesterday in a written statement that Vick had accepted responsibility from the beginning.

“His self-surrender further demonstrates that acceptance,” Martin said. “Michael wants to again apologize to everyone who has been hurt in this matter, and he thanks all of the people who have offered him and his family prayers and support during this time.”

Who is the Sportsman of the Year? How about Mike Bacsik? …

And so, the moment that threatened to damage baseball forever had to be saved by a little-known pitcher for the Washington Nationals named Mike Bacsik. Yes, the man who gave up home run No. 756 is also the man who made it just a little bit tolerable.
As Bacsik stood on the mound at AT&T Park on Aug. 7 -- the historic home-run ball leaving a vapor trail over his head -- he had three options. He could slink away like Selig. He could pout like Bonds. Or he could give baseball the levity it really needed.

"Well," Bacsik said, "If I didn't give up this home run, nobody would ever remember me." Then he did what Bonds never could. He laughed at himself.

Just like that, the new home-run king was upstaged by a journeyman. While Bonds was the usual portrait of self-congratulation -- pounding his chest, pointing to the sky, wearing a T-shirt with his own image -- Bacsik was pure self-deprecation.
"I always dreamed about this as a kid," Bacsik said. "But when I dreamed of it, I thought I would be the one hitting the home run."

Whether or not Bonds's home-run totals are steroid-enhanced, Bacsik's joy was genuine. He talked wishfully about someday appearing at baseball card shows with Al Downing, the former Dodgers' pitcher who gave up No. 715 to Aaron.

Bacsik became the best ambassador that baseball could have sent to AT&T Park. After the home run, he tipped his cap to Bonds. And after he was removed from the game, he went to the Giants' clubhouse to congratulate Bonds in person. Also inside were Willie McCovey and Willie Mays. "I did not belong in that room," Bacsik said.

To the contrary, baseball needed him in that room, in that stadium, on that night. For all sorts of reasons, Bonds is not the ideal home-run king. But Bacsik was the ideal foil. He turned a point of humiliation into a point of pride, and turned himself from a No. 5 starter into the Sportsman of the Year.

When his duty was done, he left the ballpark, met up with a childhood friend, and hit the bars in San Francisco. And he drank for free.

The Nextel Cup has a winner, and it is Jimmie Johnson winning his 2nd in a row. He was great, and well deserving.

As a Gordon homer, I was curious if the format change has cost Gordon any titles? apparently, it cost him the title in 2004 and now in 2007 …

Gordon won his titles in 1995, 1997, 1998 and 2001 through season-long points battles against the field. Johnson’s victories have come via the 10-race playoff at the end of each season, a switch Nascar made in 2004 to add excitement to the fall portion of the schedule, when racing battles the N.F.L. and other professional and college sports for fan interest and television ratings.

If the drivers were still competing under the old system, Gordon would be the one celebrating the championship this season. He had a 312-point lead over the second-place driver, Tony Stewart, after the 26th and final race of the regular season. It was a 410-point advantage over Johnson. But all that was wiped out when the points were reset at the start of the playoff.

The same thing happened to Gordon in 2004, when he led the points through the first 26 races but was outrun by Kurt Busch and Johnson in the Chase.

Had the system not changed, Gordon would probably be closing in on his sixth title — one short of the career record shared by Richard Petty and Dale Earnhardt.

“I don’t think anything is unfair when you know going into it what it is,” Gordon said recently when asked if the points system was unfair. “The points are whatever Nascar decides to make it, and we’re going to race the championship however they do it.

Among those agreeing with Gordon is Stewart, who is the only driver who can claim he is a champion of both eras. Stewart, a two-time Cup winner, earned his first title under the old system in 2002. His second championship came in 2005, in the second year of the Chase.

“How you race for 36 weeks is different than how you race for a 26-race stretch and then a 10-week stretch,” Stewart said. “Yeah, it is different. It is comparing apples to oranges. But you still take the same gratification both ways and knowing that this is, whatever the format was, we were able to conquer it and beat it.”

Posted by Sturminator at 9:23 AM

Bob, I think you meant "Fighting" Manginos. A flying Mangino would be very scary.

Merriman getting jacked up looked like Latimer in The Program after he got off the juice and couldnt make the goal line stand.

C'mon Bob, you've gotta give a little love to Red Raider for doing us all a favor and KO-ing Sooner on Saturday night...