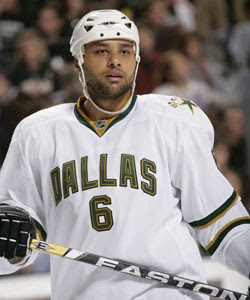 Wasn’t expecting a press release to hit my email 2 days ago announcing the Trevor Daley signing, but after pondering it from all angles, I think the Stars did pretty well here.

However, this has appeared controversial to some as I have found a few emails like this in my box:

I don’t know what Joe is thinking here. You don’t marry players like Daley. 6 years for 19 mill? Is that a joke?

You just look at this and hope Joe knows what he’s doing as everything else he’s done has turned out well. There’s just no way he would get a deal like this on the market. NO WAY. And if he went somewhere else, who cares? We’ll get another Skraskins for a mill and a half. Trevor is no longer a kid with potential. He’s 27 and has played close to 500 games now. This is as good as he’s going to get.

I hope I’m wrong about this and Joe is right like he has been.

Steven, get away from the sharp objects! Look, I will not try to convince anyone that Trevor has made us forget Sergei Zubov. But, then again, Zubov was never going to play for $3 million either. Could you imagine a 27-year old Zubov hitting free agency this coming summer? I would safely guess he would grab $6-7 annually in free agency – maybe even more. But, like I said, Trevor is no Sergei.

Here is what Trevor is to me – solid, versatile, dependable, and reasonably safe. You play him in all situations and scenarios – penalty kill (2nd most D-man), Power Play (2nd most D-man), 4 on 4, even strength, he is always out there. Stephane Robidas plays the most ice time on this team, Trevor plays the 2nd most. Frankly, I am not sure anyone would try to convince you that Daley is better than Robidas, but he is nearly 7 years younger. Robidas hits 34 in March, and as much as I love him, I also realize that he has been hit so hard so many times that you cannot always assume you can put everything on him.

You need a group of defensemen who can do different things. I do think Skrastins is a nice piece at his money, but you cannot tell me the last time Karlis did something remarkable in the offensive end of the ice. He Is a clear 1-end of the ice D-man. Daley does offense and defense. Trevor can carry the puck, he skates like the wind, he seems ready for a scrum, and he has some pretty good confidence.

I would like to see fewer meltdowns in his own end, but honestly, I compare the blue-line to a pitching staff (take the Rangers). The second the team gets an ace in here to play the #1 D-man role, then, everyone can slide down a spot and it will look better than they presently do because they will be asked to do less. Let’s face it, we have asked Robidas and Daley (and others) to do more than would be ideal. The blue-line has had the least amount of investment in the last few seasons and has done a pretty decent job given the lack or resources.

Understand what $3m is in NHL money. The Cap is about $59.4 million for the 23 players you have on your roster. If you base your cap on the 20 you dress each night, we are talking about 20 players and about $60m – which comes out to what? $3 per player. It is not superstar money. It is simply, average veteran player money. The idea that “he wouldn’t get this in the open market” is probably right. He would likely get more. You saw Dan Hamhuis’ deal this summer, right? 6 years/$27million. He is in tonight for Vancouver, he is about the same age (28), and plays about the same amount of ice. Zbynek Michalek signed in Pittsburgh last summer for 5 years/$20 million, at the age of 28. Anton Volchenkov, 28, grabbed a 6 year/$25.5 million deal in New Jersey last summer.

All 3 are in Trevor’s age group and demonstrate what players (with admittedly different skill sets) who fall in the “Top 4” defensemen bin, but not in the “franchise defensemen” group, get in the open market.

Now, take a look at the Stars defensemen spreadsheet moving forward: Next season, the Stars have Robidas, Nik Grossman, Matt Niskanen, and Mark Fistric signed up. We see that the Stars still don’t know what they have in Niskanen and Fistric, because neither are a given in the lineup lately. Karlis Skrastins and Jeff Woywitka are both showing some solid veteran dependability, but both are free agents and neither is considered a fixture moving forward, I don’t believe.

So, worst case, you have Robidas and Grossman heading into next season. But, you need 6 you like. This is another reason why grabbing a solid mid-tier defensemen on both ends of the ice is a wise move. You have to think big picture.

Trevor is not Sergei. In fact, nobody is, and there is a pretty good chance that nobody will be for a real long time. But, he is a strong piece of this puzzle signed at a fair price for both sides. To get him in his prime locked in here allows Joe Nieuwendyk to concentrate on more pressing matters now (Brad Richards, anyone?).

Congratulations, Trevor, on a nice stocking stuffer. Now make the deal look like a bargain.
Posted by Sturminator at 8:45 AM

Email ThisBlogThis!Share to TwitterShare to FacebookShare to Pinterest
Labels: Stars 2011