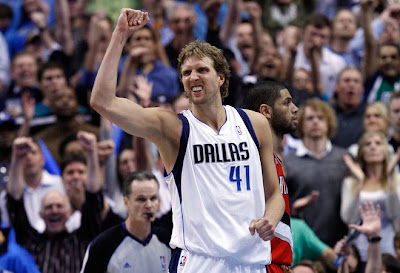 You certainly must give the Mavericks this much credit - it would have been very easy to allow the Portland Trailblazers to march away in Game 1 midway through the 4th Quarter. The Blazers had taken over the momentum, the pace, the style, and most importantly the score with a 72-66 lead, inside 6 minutes to go.

At that juncture of the contest, the Mavs 3's were no longer dropping through, the defense now looked timid and ineffective, and Portland seemed to be ending a fair number of their possessions by hanging on the rim after a dunk.

And despite not following the recipe for victory for much of the night, the Mavs deserve very high amounts of respect and credit for showing the resolve to fight their way out of that mess. Led almost completely by their two most trusted veterans, Dirk Nowitzki and Jason Kidd, they made enough plays and won enough battles in the final minutes to emerge with the Game 1 win.

Sure, they were able to escape with a win despite doing many things that most of us think lead directly to defeat - settling on the perimeter game is the most primary of those items - but winning Game 1 in a best of 7 series is certainly a great way to boost a confidence level that is usually fragile this time of year.

Kidd played one of his finest games in years, with 24 crucial points, and a number of plays that resulted in getting the ball back down the stretch through steals, rebounds, and even the rare blocked shot. And, full credit goes to Dirk, who figured out a way down the stretch to generate offense. He scored an amazing 14 points in the final 5 minutes, showing again that he is quite clutch in these situations.

The NBA game remains a contest divided into 2 equally important segments: The first 45 minutes and the final 3. With 2:55 to go, LaMarcus Aldridge scored again to cut the Mavs margin to 77-76, and it was now a case of who could score and who could get stops. A gigantic 3pt play from Dirk, a Chandler rebound on defense, another Chandler rebound on offense, and the kill-shot, Kidd's 6th 3-pointer of the game with 25.4 to play, and the Mavs had their victory. Well earned with their ability to execute and convert in that all-important final 3 minutes.

It was anything but a masterpiece. And frankly, those of us who feared the match-up with Portland saw many of the characteristics of the game that made us question the ability of Dallas to defeat the Blazers 4 times in 2 weeks, but surely the numbers of Game 1 winners (Game 1 winners go on to win the series 78% of the time) should allow the Mavericks some level of confidence as we all await Game 2 on Tuesday Night.

And now, various thoughts and observations from a big win to start the 2011 Mavericks playoff campaign:

* There is no doubt that Jason Kidd looked refreshed and at the top of his game in Game 1. Can we directly connect it to the rest he was afforded when he did not play againt Denver and the Clippers with a week to go in the season? Quite possibly. But, it should then give us some level of pause that the tired Jason Kidd could return without notice during a grueling series such as this. Kidd's performance was out of this world and allowed some of us to forget his very difficult time in Round 1 in 2010. We should also note that his 24 points last night surpassed his point total of every game this season (he scored 20 points twice all year). Full marks to the 38-year old point guard. He was the key to the victory. But, does he have the ability to continue this trend? Dallas better hope so.

* One of the reasons they are going to need Kidd's performances to continue will certainly be the reality that JJ Barea's minutes and to some level Jason Terry's are going to be under constant attack from Portland on the defensive side of the game. Andre Miller made sure that when he was guarded by Barea, he would post up the smaller point guard and make the Mavericks pay for that match-up. It happened so often that Rick Carlisle quickly removed Barea from the game in the middle of the 2nd Quarter when it was clear what Miller's plan was going to be. Can they play Barea some? Yes. But it appears it will have to generally be when Miller is resting for the Blazers.

* The biggest reason that I believe many have picked the Blazers to win this series is merely a matter of match-up issues. Traditionally, a team with long and athletic "bigs" can give the Mavericks fits. So, here comes Portalnd who can start Marcus Camby, Aldridge, and Gerald Wallace along the front, and then bring Nick Batum off the bench. All four of those players played at least 29 minutes and generally at least 3 of them were in the game at all times. Wallace is 6'7, Batum 6'8, Camby and Aldridge are both 6'11. All of them take turns guarding Dirk and making sure the rest of the Mavs stay out at the 3-point line. The match-up makes the paint a tough place for the Mavericks to go because of their ability to cause plenty of issues to prevent the Mavericks from getting off many shots from close in. This explains the 46-18 points-in-the-paint advantage and a further reason why Portland is not too terribly depressed yet about how these next 6 games could play out. One certainly has to wonder how this series shifts in the Rose Garden if the Mavericks are relying on the ability to make 10 3-point shots to get a victory.

* Which leads me to Derek Harper's keys to the game before last night's tip-off: "Attack the basket and be physical". Those were his keys to the victory and what I believe many would suggest the Mavs' keys for pretty much the entire Nowitzki era. Attack the basket and be physical? These are characteristics the Mavericks do not have in great supply. There is almost no attacking of the basket. They just don't have that roster. Tyson Chandler and Brendan Haywood have them more equipped to be physical in the paint than ever before (Erick Dampier and Raef Lafrentz just did not scare anyone coming down the lane) but you do have to wonder about my long time mantra of Mavericks playoff basketball: "Dallas is trading 2 footers for 22 footers." If they concede shots at the rim and counter with their own shots from the perimeter, the odds are not great for winning a series. They have won Game 1 with that dangerous formula, but we must all wonder if they can win 4 of 7 without the ability to lay some claim to the paint.

* The further adventures of Jason Terry continue through Game 1. We all know his resume and how vital he is to this team down the stretch and in the 4th Quarter. We also know that he is in a very odd place mentally right now. He is frustrated and he is battling, and last night he made a few important contributions but was still not himself. 10 points and only 5 Field Goal attempts for Terry. His playoff performances for the last few seasons have been quite disappointing - a point which has been asked of him quite frequently over the last 36 months. You know he wants to quiet those concerns but you also know that he is putting plenty of pressure on himself. There is no doubt the Mavericks cannot survive long into the playoffs without some of his more vintage performances.

* The last time Portland and Dallas hooked up in the playoffs was a rather unpredictable 7 game series back in 2003. For fun, I grabbed the boxscore of the Game 7 in Dallas from that series to review who the key players were on each side. For Dallas, the 7 players in the rotation were: Eddie Najera, Dirk, Raef LaFrentz, Michael Finley, Steve Nash, Nick Van Exel, and Shawn Bradley. Portland countered with Rasheed Wallace, Arvydas Sabonis, Zach Randolph, Damon Stoudamire, Bonzi Wells, Scottie Pippen, and Ruben Patterson. The Mavericks took a 3-0 lead in the series, lost the next 3, and then relied on a big game 7 from Dirk on a Sunday afternoon to advance. Watching Dirk deliver again in 2011 for this team in the final minutes should further cement his reputation in this city as the greatest basketball player we have ever seen. Amazing to me that this guy still has severe critics in his own city given how many times he has delivered over the years.

* The Mavericks frequently do things this time of year which I would define as interesting and odd. I think last night's candidate would be starting DeShawn Stevenson at guard. I find it odd of course given that he has hardly played in the last 60 days - 17 different times Stevenson played 6 minutes or less since February 5th. Many people reminded me that the team was 33-12 with DeShawn starting so why do I think this was a bad idea? If they were doing well with him as the starter, why would they ground that idea for over 60 days - only to bring it back the night of Game 1? It reminded me a bit of some rather interesting strategies from Avery Johnson before the Golden State series of 2007. In a perfect world, you would like to get your playoff rotation set in the final several regular season games. Instead, the Mavericks pull Stevenson from out of the moth balls and give him a significant role in Game 1. I understand the Roddy Beaubois efforts, but surely they were not going to start him even if he was healthy, right? If they lost last night, I think people would be accusing Rick Carlisle of throwing darts at a dart board over this issue.

In writing this piece, I feel the tone is largely similar to what I would write after a loss. That is because much of what they did last night generally leads to losses. But, full marks must go to Dallas for figuring out a way to win that game through less than ideal means. They had to scrap and claw and keep the faith for 48 minutes.

Game 1 is well-deserved. But, there is no question both teams still believe that they are right where they want to be.

Settle in, because this is going to be a long series, I suspect.
Posted by Sturminator at 7:43 AM