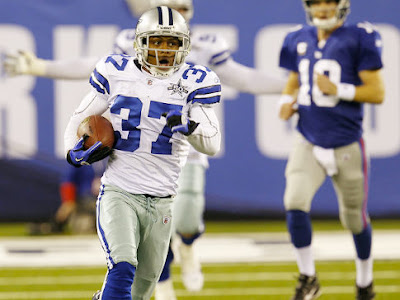 2010 Draft Profile:Bryan McCann - 6'0 - 175 - 4.28 - Usually in this spot, I would find his draft profile from Ourlads.com or another reputable draft service. However, in McCann's spot, there is no record of a combine appearance as he was not even invited and aside from a late showing at his SMU Pro Day, there is almost nothing to suggest he was a legitimate NFL prospect. Here are a few notes from his college career - An All-Conference USA honorable mention, McCann broke up 10 passes his senior year. He also maintained a 24.2 average on kickoff returns. As a junior, he collected 35 tackles, five passes broken up three picks. More impressively, McCann hasn't missed a start in about 30 games. In 2008, started at a few positions in SMU's secondary. McCann broke up seven passes and intercepted four balls as a sophomore. But, more than anything, he raised many eyebrows for his SMU Pro Day performance when he ran a 4.28 40 yard dash (which some suggest was wind-aided; he then ran a 4.32 the other direction) and logged a 40.5" vertical leap. Those tools were enough to get him included into the mix as a undrafted free agent the day after the draft, and the Cowboys had enough local knowledge of him to snag him by that route.

Pre 2010: McCann speaks about his own route by suggesting he was very happy to choose to sign with Dallas after looking at depth charts and realizing the Cowboys had no such thing as a 4th Cornerback entering camp. After Terence Newman, Mike Jenkins, and Orlando Scandrick, the Cowboys had Jamar Wall (Texas Tech) and journeyman Cletis Gordan listed for McCann to compete with at training camp. He also had the knack to be a solid return man, but it should be noted that the Cowboys were reasonably sure that they had the return man they needed when they drafted Akwasi Owusu-Ansah in the 4th Round of the 2010 draft. During camp, McCann showed enough to make many observers believe he might latch on to the final roster, but then the Cowboys decided that the corner/safety ability of Owusu-Ansah and Alan Ball allowed them to only keep 3 true corners on the final 53. Wall, Gordan, and McCann all were released.

2010: After he was released by the Cowboys, the Baltimore Ravens came calling for McCann to help them with their own roster crunch and signed him to their 53-man roster. He stayed a few weeks, but never played and was released at the end of September. At that point, the Ravens and Cowboys both offered him spots on their practice squad, but again he elected to return to Dallas where he rightfully believed he might get his big chance. On November 4th, he was finally promoted to the 53 when the Cowboys gave up on 2009 3rd Round LB jason Williams. Akwasi Owusu-Ansah was injured the week before, and McCann was needed to be the return man in Green Bay. Instantly, he made impressions with his electric speed. He was wrongfully charged with a fumble in his debut, but replays show that both knees were on the ground before the ball was freed (Wade Phillips had no timeouts to challenge the play). The next week in New York, McCann was called upon to play substantial time in a game where Newman and Jenkins both left due to injury. He was asked to defend one of the more imposing physical receivers in the league as Hakeem Nicks was attempting to work over the young McCann. McCann battled hard and won his fair share of downs against Nicks (lost his fair share, too) - highlighted with a 100-yard interception return when Nicks stopped on a slant and Eli Manning threw the ball right to an aggressive McCann who then turned on the jets and set a Cowboys record by taking it all the way for a Touchdown. The next week, McCann again scored a Touchdown with a magnificent special teams moment against Detroit when he grabbed a ball at his own 3-yard line that had already been touched by the Lions and again used world class speed to run away from everyone and turn a game's momentum on 1 decision. It is one thing to have great speed listed on your webpage, but to show it on the field with NFL players unable to catch you is something that should insure employment for the immediate future for McCann.

2011 Analysis: For McCann moving forward, it will be important for him to demonstrate that he can be a reasonable cover option in this league. With only 146 snaps last season, it would be difficult to assume we know what he is capable of as a part of the Cowboys defense. It is also bothersome to me that the Cowboys have 4 corners and they are all considered small by NFL standards (all 4 are listed at 5'10, and only Jenkins weighs 200 pounds). But, McCann is not my concern because he might be my team's best kickoff return option, too. It is certainly too early to rule on Owusu-Ansah, but after watching his speed and ability returning kicks in September and October and then seeing McCann's explosion, I have made up my mind (Dez Bryant is likely the best of the bunch, but I want to be rather judicious on my use of that valuable piece on special teams). The new kickoff rules may make this more of a moot point, but McCann will have 1st priority for me in August to win that job. As a corner, he is subject to the Cowboys draft plans, as one should assume that the Cowboys will be targeting a corner with their first several picks if one is available in the right slot. Either way, given his ability that he has already shown to break a game open, there is little doubt that he has earned a job to at least be a solid contributor on special teams for 2011. The Cowboys need more players at the bottom of their roster who have tools to put their fingerprints on games. McCann did that twice for a team that won only 6 games in 2010.

Sam Young
Posted by Sturminator at 7:14 AM